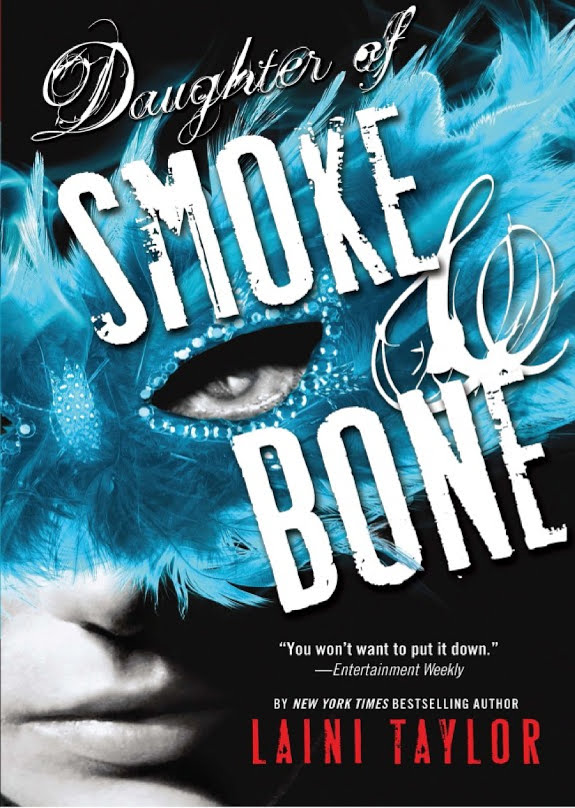 This YA fantasy adventure (432 pages) was published in September of 2011 by Little, Brown Books for Young Readers. The book takes you to Prague. Melissa read Daughter of Smoke & Bone and loved it; it wouldn't be on our site if she didn't recommend it.

Dauther of Smoke and Bone Trilogy

This fantasy adventure story will take you from Prague to Marrakech and to some magical places found in the unknown in-between.

This is the first book in a globe-trotting YA fantasy series. But if you’re not a fantasy fan, don’t close your heart to it! Although mysterious winged creatures abound, this reads more like magical realism: a shimmer of enchantment that veils our everyday world.

Our heroine Karou is 17 years old and multi-lingual, though not all of the languages she speaks are human. She has blue hair — it grows out of her head that way — and she fills her sketchbook with drawings of monsters that may or may not be real. Much to the chagrin of her best friend Zuzana, Karou also has a very unusual job that requires her to take off on mysterious errands through magical portals in other countries. And oh, yeah: She was also raised by chimera (creatures that embody the attributes of animals and humans), and her father’s name is Brimstone.

The family business depends on collecting teeth from around the globe (‘no baby teeth’ and ‘no rotting’), and she doesn’t know why. But the question that plagues Karou is not what is happening?! but who am I?

When the story begins, mysterious winged creatures are scorching their palm prints into doorways in cities around the world. On a mission in Marrakech, Karou becomes entangled with Akiva, an angel-demon. Once he turns his fire-colored eyes on her, nothing will ever be the same.

This novel deftly weaves elements we love: suspense and danger, atmospheric settings, a touch of romance, and a gut-punch ending. As Kerou goes on her mystical quest, she’s on the hunt to understand her past and know herself.

The streets of Prague were a fantasia scarcely touched by the twenty-first century… It was a city of alchemists and dreamers, its medieval cobbles once trod by golems, mystics, invading armies. Tall houses glowed goldenrod and carmine and eggshell blue, embellished with Rococo plasterwork and capped in roofs of uniform red. Baroque cupolas were the soft green of antique copper, and Gothic steeples stood ready to impale fallen angels. The wind carried the memory of magic, revolution, violins, and the cobbled lanes meandered like creeks. — Laini Taylor