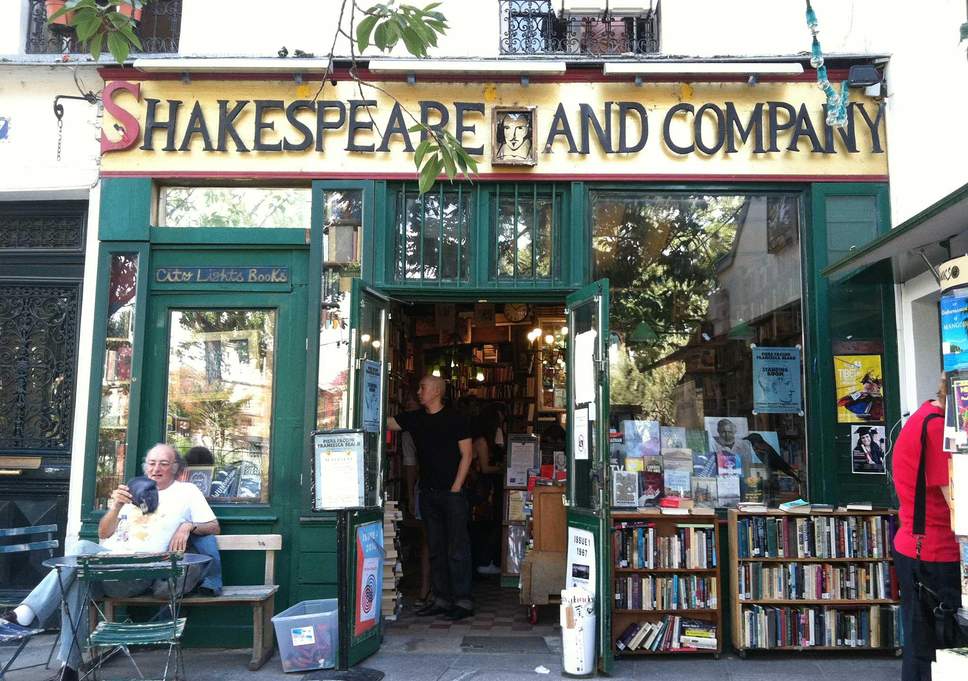 There have actually been three versions of what is often described as the most famous bookstore in the world: the first was opened by Sylvia Beach in 1919 on the rue Dupuytren. When the store outgrew its walls a few years later, she moved it to the rue de l’Odéon. It was from this destination that Beach published Joyce’s Ulysses, and where Joyce, along with Ernest Hemingway, Djuna Barnes, Ezra Pound, Anaïs Nin, Julio Cortázar,James Baldwin, etc etc etc, hung out. But the bookstore was forced to close during the occupation of Paris in WWII. According to the store’s website, it was because Beach didn’t want to sell book to Nazis:

One day that December, a Nazi officer entered her store and demanded Beach’s last copy of Finnegans Wake. Beach declined to sell him the book. The officer said he would return in the afternoon to confiscate all of Beach’s goods and to close her bookstore. After he left, Beach immediately moved all the shop’s books and belongings to an upstairs apartment. In the end, she would spend six months in an internment camp in Vittel, and her bookshop would never reopen.

But in 1951, a man named George Whitman opened a bookstore, called “Le Mistral,” on the rue de la Bûcherie, and in the late ’50s, Beach offered Whitman the name. “I created this bookstore like a man would write a novel, building each room like a chapter,” he told The Washington Post. “I like people to open the door the way they open a book, a book that leads into a magic world in their imaginations.” Shakespeare & Company was reborn, and readers and writers have been flocking to it ever since, even sleeping there. In fact, some 30,000 “Tumbleweeds” have spent some amount of time living in the store, “sleeping on intermittently bedbug-infested cots and benches scattered throughout the store in exchange for a couple of hours of work a day and a promise to spend at least some of their downtime reading and writing; a one-page autobiography is mandatory.” Whitman died in 2011; the bookshop is now run by his daughter, whom he named Sylvia Beach Whitman.