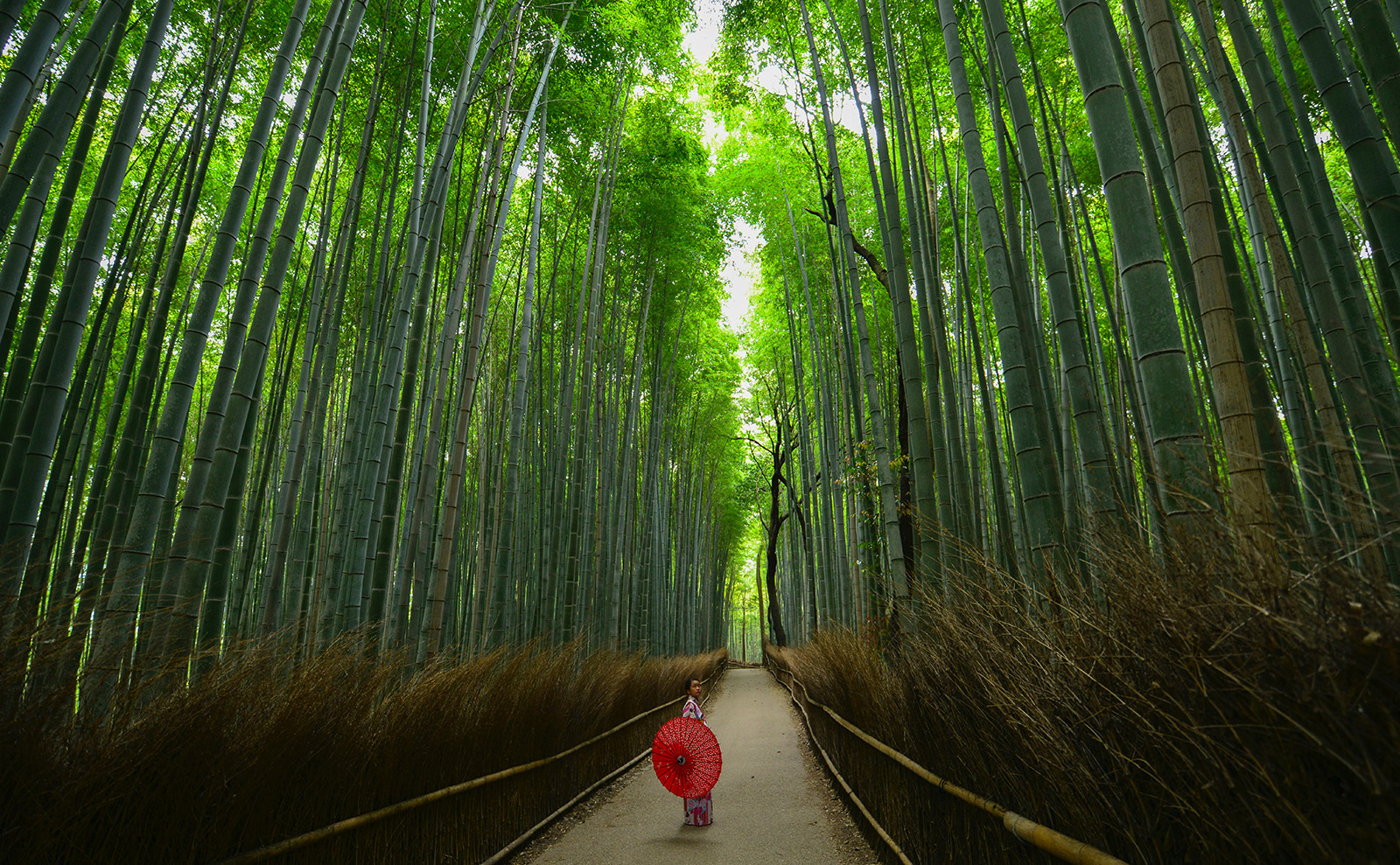 That cool green wonderland above is the Sagano Bamboo Forest in the Arashiyama district of Kyoto. Within the grove, visitors are treated to the gentle rustling of the leaves and creaking of the boughs as they sway in the breeze. The sound of the forest was included on a list of ‘100 Soundscapes in Japan’ compiled by the Ministry of Environment to honor Japan’s natural music.

In Episode 03 of our podcast Japan: Family Honor and Super-Cute Stuff we talked about the rhythm of Tokyo and the varied geography of the rest of Japan. Here are a few snapshots of Japan that take you beyond its modern urban landscape.

To reach this Shinto shrine, visitors walk on paths that pass beneath thousands of the orange-and-black torri gates that typically mark the entrances to shrines. These gates, the Senbon Torii, were donated by individuals and companies. Each gate is inscribed with the donor’s name and is given in the hope that a wish will come true — or in gratitude for a wish that has become a reality. {more}

This is the view of the garden from inside the Zen Buddhist temple. Built in the mid-14th century, it has been the victim of fires seven times (!), and this version dates from the 19th century. {more}

The name of this Zen Buddhist temple literally means ‘Temple of the Golden Pavilion,’ and so it is: The top two floors are completely covered in gold leaf. The temple was the retirement home of the shogun Ashikaga Yoshimitsu, and according to his will, it became a Zen temple after his death in 1408. {more}

The Joshinetsu Kogen National Park is famous for its wild, hot-spring-loving Japanese macaques, a.k.a., snow monkeys. They descend from the steep cliffs and forest to soak in the hot springs (known as onsen), then return to their homes in the forests at night. {more}

The active volcano at the center of Mount Aso is named for the god Nakadake. It’s the largest and most active volcano in Japan. Visitors can ride to the top on a cable car that delivers views of the surrounding Kusasenri plain and the dramatic volcanic crater. {more}

This Shinto shrine is found on the shore of Lake Ashi, a crater lake that sits in the caldera (crater) of volcanic Mount Hakone — which last erupted in 1170. This shrine was originally founded in 757 at the summit of the mountain; it was very popular with samurai during the Kamakura period (1185–1333) when samurai were on the rise. The shrine was moved to its lakeside location in the 17th century. {more}

Who Needs a Love Hotel When There's a Book Hotel? Meet Book and Bed Tokyo

Pssst... how'd you like to sleep INSIDE a bookshelf?! That's exactly what you'll get to do at Book and Bed Tokyo, a collection of six hostels devoted to reading (and a little bit of sleeping).

These tender pork meatballs are packed with umami — like gyoza without the noodle-wrapper. Dig into them while you read this lovely, poignant novel of love, friendship, and the power of words in Japan.

This can't-put-it-down book is an exhilarating cat-and-mouse game. We know who did it! Now we're watching the culprit try to outplay the intelligent detectives who are on his tail. Deliciously, painfully suspenseful.