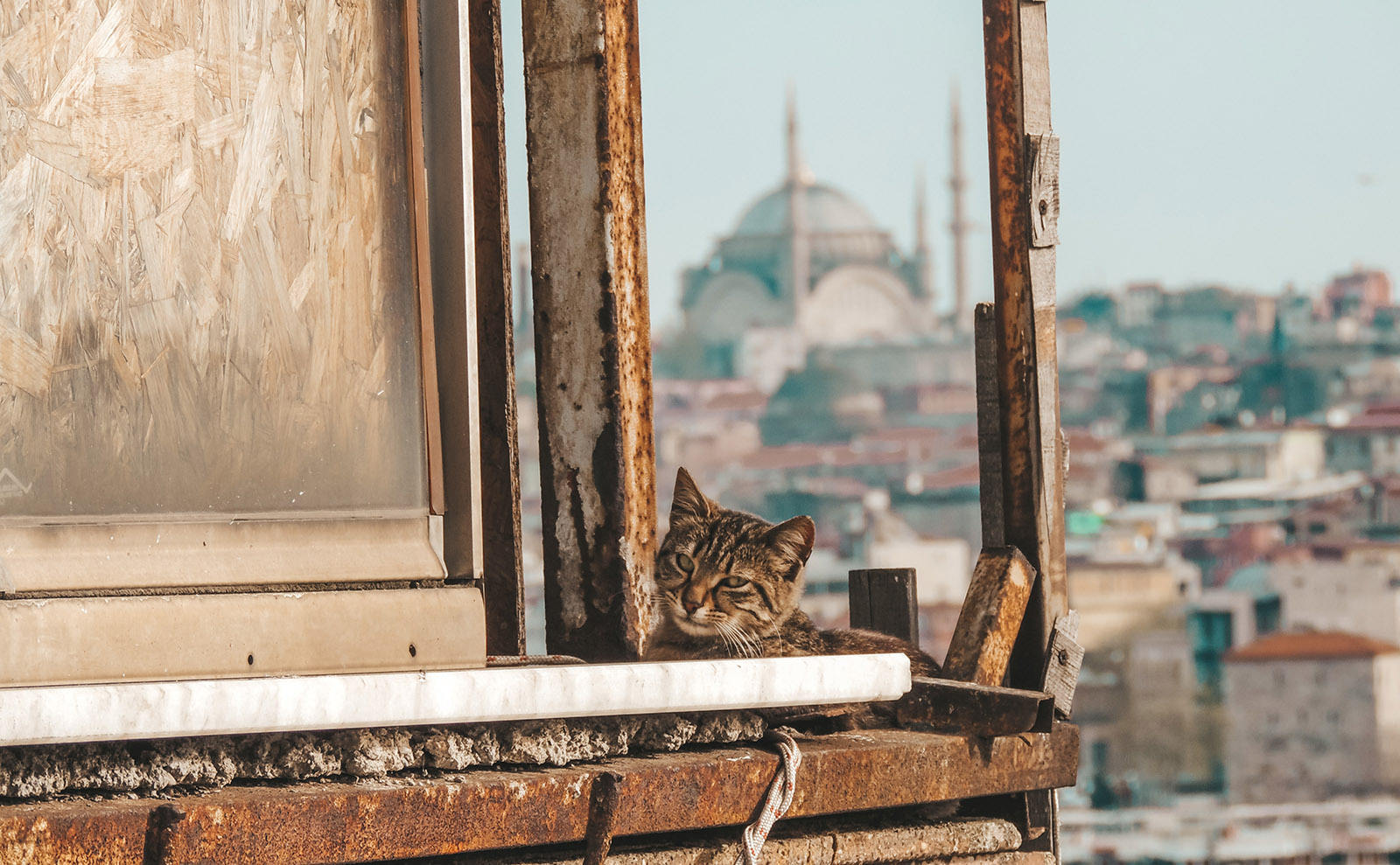 The Cats of Istanbul: Street-wise and Sweeter Than Honey

When you visit Istanbul, you’ll definitely want to stroll in the Grand Bazaar, sail on the Bosphorous at sunset, and wander under the stunning mosaics of the Hagia Sophia. But one of the sweetest sights in this fabled city is totally free: the cats of Istanbul.

According to estimates, about 125,000 stray cats share the cafés, shops, mosques, the waterfront, and even university classes with the residents of Istanbul. The frisky felines are considered neighbors and communal pets, rather than pests, and are cared for by people in the neighborhood.

Throughout the city, you’ll find cat houses — oversized doll houses that bunk three or four cats — with food and water dishes out front that are replenished by good samaritans. The city has installed vending machines that dispense food for a few coins; small bowls for water and dry food decorate most sidewalks. Because they’re so well cared for, the cats are known to be snuggly and might just join you for a quick pet in the park or a cuddle in the café.

So why are there so many cats in Istanbul? We can probably assume that the many sunny spots for all-afternoon napping are a big draw for the kitties themselves, but the reasons go deeper than that. There’s a long history of revering cats in Islam. Mustafa Efe, the imam of the Aziz Mahmud Hudayi mosque, welcomes cats into the mosque. He told The Guardian, ‘We are responsible for these living creatures, they are our friends who cannot talk.’

According to stories in the hadith, the collection of Muhammad’s sayings, the Prophet himself was fond of cats. In one tale, a cat protected Muhammad from a deadly serpent. When he blessed that cat, it gave all cats the special ability to always land on their feet. A popular saying also warns, ‘If you kill a cat, you need to build a mosque to be forgiven by God.’ (As of 2021, pets and stray animals in Istanbul were awarded ‘living being’ status, which means a punishment of up to four years in jail for crimes against animals.)

Cats are also respected for their clean habits and their mouse- and rat-hunting prowess. For centuries, they kept Istanbul’s traditional wooden houses and important ancient libraries free from rodent trespassers.

And let’s be honest: Cats of all colors are adorable and make excellent reading and tea-drinking companions.

In 2016, filmmakers captured a cats’-eye view of Istanbul in the documentary Kedi. It tells the story of seven remarkable cats — meet the cast of cats — who live in Turkey’s most romantic city.

Using a special camera rig, the cinematographers captured these feline friends at street level and worked with local residents to follow the cats when they moved from public alleys to private gardens and flats.

The film was beloved by critics and audiences. On NPR, John Powers wrote, ‘We see that these cats aren’t merely wondrous creatures in themselves, but that they enrich the whole city. They give the people around them a vision of another freer, wilder, more spontaneous form of life, one that can be easily lost in a huge, stressful, rapidly modernizing place like Istanbul.’

For a daily dose of street-wise cats and frolicking kittens, we encourage you to follow the #catsofistanbul hashtag. You can also share in the daily adventures of cats inside the beautiful Hagia Sophia with @hagiasophiacat.

Want to visit more cats living their best lives in far-flung destinations? You might like Catlas Obscura, the curated list on Atlas Obscura of cat-related spots around the world.

This might very well be the ideal book to read in the fall. It's made for shorter days, eerie twilights, crunchy leaves, and a nip in the air — a thrilling tour of Eastern Europe, libraries, history, and legend.