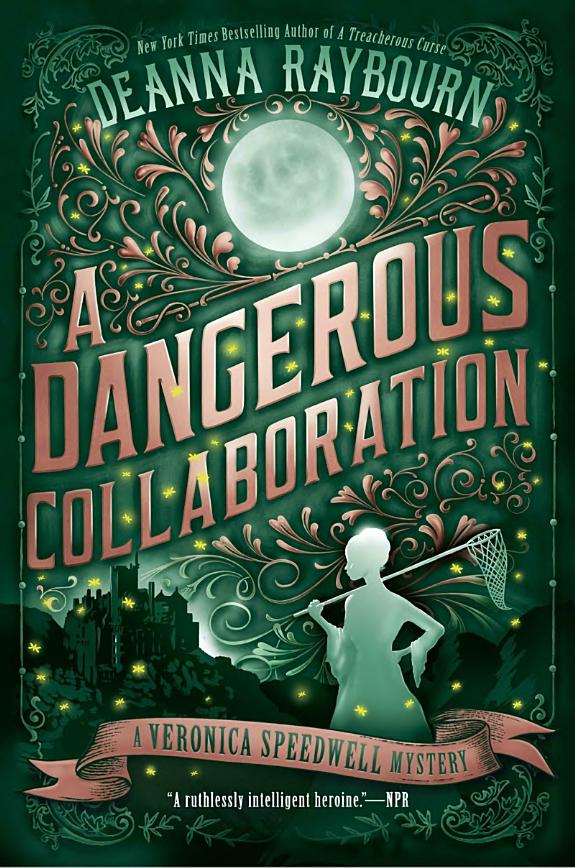 This romantic mystery (336 pages) was published in March of 2019 by Berkley Books. The book takes you to a manor house in Cornwall, England. Melissa read A Dangerous Collaboration and loved it; it wouldn't be on our site if she didn't recommend it.

Sharp-witted, sharp-tongued, and armed with a hatpin, lepidopterist Veronica Speedwell is attracted to trouble like a moth to a flame — and can’t resist the siren call of crimes that need solving. There’s not a 19th-century convention she won’t flout, and we love her for it.

She’s also admired (and bedeviled, as it turns out) by the Honourable Revelstoke Templeton-Vane, a.k.a., Stoker, her partner-in-crime-solving. He’s an aristocratic bad boy with the true heart of a raging feminist. The third son of a Viscount, he’s had to make his own way in the world, earning his keep as a taxidermist and working with Veronica to turn a collection of curiosities into a museum.

Or that’s what they’re meant to be doing with their time.

In reality, they’re more often bickering, flirting, and galavanting off into adventures. A charmingly antagonistic couple like Bogie and Bacall or Nick and Nora, we can see Veronica and Stoker belong together. But two of them are equal parts guarded and clueless, which lends a delicious will-they-or-won’t-they energy to their escapades.

And this particular caper — their fourth together — is a Gothic-tinged doozy.

It’s 1888, and Veronica has been lured to St. Maddern’s Isle — a moody island off the coast of Cornwall — for a glamorous weekend house party. In exchange for her attendance, she’ll take possession of larvae of the Romilly Glasswing, a rare butterfly with translucent wings that’s thought to be extinct.

But once she’s on the island, it becomes abundantly clear that this will not be a posh tea-drinking, card-playing weekend with polite conversation. Behind the manor house is a garden filled with poisonous plants. And locals in the nearby village tell tales of ghosts, pixies, mermaids, and giants.

During a very awkward dinner party (and accompanying violent storm), it’s revealed that everyone there has a connection to the host’s wife, who mysteriously disappeared on her wedding day three years ago.

As Veronica and Stoker poke into relationships and secrets best left unrevealed, they find themselves in grave danger.

It would be uncharitable to give anything else away, but rest assured that there are secret passages, a séance, love triangles, witty banter, brooding heroes, and perilous situations — as well as a harpsichord that plays on its own in the middle of the night.

A mist had risen, shrouding the island and its castle from sight until we were quite close, and then, without preamble, a soft sigh of wind blew the shreds of fog away, and there it was, looming above us, black and forbidding and utterly enormous from the vantage point of the tiny boat in the open sea.

‘There she be,’ the Cornishman said proudly. ‘The Isle.’ — Deanna Raybourn