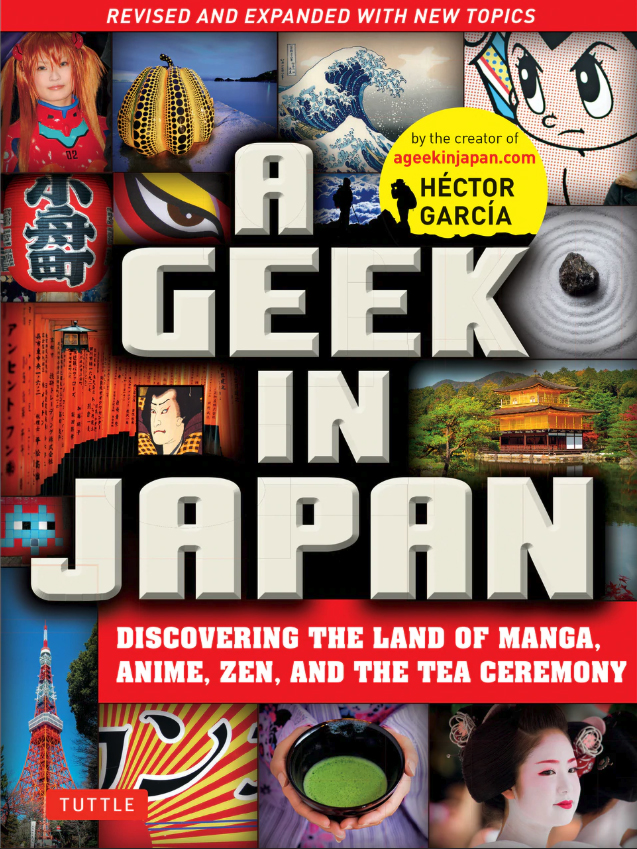 This almost-encyclopedia of Japanese culture (160 pages) was published in June of 2011 by Tuttle Publishing. The book takes you to Japan. David read A Geek in Japan and loved it; it wouldn't be on our site if he didn't recommend it.

A Geek in Japan

Discovering the Land of Manga, Anime, Zen, and the Tea Ceremony

What does a self-described geek from Spain know about Japanese culture? Turns out, quite a lot! Thanks to his engaging voice, insatiable curiosity, and an eye for intriguing details, Hector Garcia is a first-rate tour guide to all things manga, anime, J-pop, Zen, and everyday culture in Japan.

The author has lived in Japan since 2004. His abundant enthusiasm, coupled with a love of learning and all things Japanese, has made him an expert on the Japanese experience for people outside the culture. His lifestyle book Ikigai is all about how to a little bit of Japanese into our everyday lives — but Geek in Japan is an exuberant celebration of the country and its pop culture output.

Think of this book as the most fun-to-read encyclopedia ever. The graphic design is colorful and built for scanning, so you can dip in and out at will. The writing is breezy and conversational, punctuated with hundreds of photos and appropriately cute illustrations.

On his romp through Japan, Garcia explores its history, religion, and philosophy with a light hand. He explains the codified elements of the temple and includes helpful tips for how to visit a shrine without feeling like a fish out of water. He also digs into the idiosyncracies of Japanese language, demystifies the everyday behavorial differences between Japan and the West (why do Japanese women cover their mouths?), and celebrates the food, movies, TV, music, and cute animals that make Japan the touchstone for stimulating (and sometimes quirky) entertainment.

The last sections of the book get practical with detailed tours of Tokyo and beyond, featuring the author’s favorite geek-related stuff like manga museums, the best electronics stores, and the places natives go to cosplay. If you want to understand how and why Japan feels so other to those of us in the West — and you’re equally as interested in Godzilla and Dragon Ball as you are Zen meditation and the best sushi — this is the book for you.

Trains in Japan are a phenomenon; there are trains everywhere, there are thousands of different kinds, there are train enthusiasts, magazines and books about trains, and I’ve even seen stores that specialize in selling only train-related products. One of the things I like most about Japanese trains is that they are incredibly punctual, and when I say incredibly I mean it…. For instance, the average delay for Shinkansen trains over the last 20 years is only 18 seconds. — Hector Garcia

Visit Hector Garcia’s blog A Geek in Japan to read about his ongoing adventures.