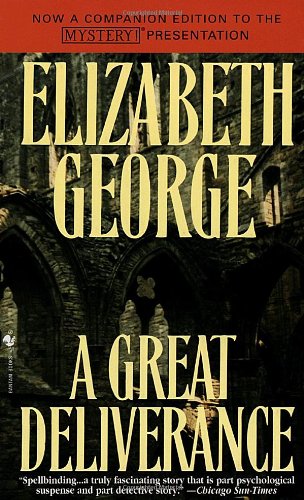 This psychological murder mystery (432 pages) was published in May of 1988 by Bantam. The book takes you to Yorkshire, England. Melissa read A Great Deliverance and loved it; it wouldn't be on our site if she didn't recommend it.

This is the first book in the stunningly good Inspector Lynley Series by American author Elizabeth George. Rich with unforgettable characters and meticulously plotted murders, these British-style mysteries are emotionally engaging and impossible to put down.

Scotland Yard Inspector Thomas Lynley (Eton educated, wealthy, and titled; he’s an Earl, for goodness’ sake) and his partner Barbara Havers (street smart, unpolished, relentless) are an unlikely pair. Their differences make them an unstoppable force when it comes to solving crimes, but their personal interactions are another matter entirely, ranging from prickly to heated to frigidly silent.

They’re aided in investigations by a support crew of equally complex and winning characters: a forensic scientist with a bitter backstory, a mercurial photographer with whom everyone falls in love, and Lady Helen Clyde, a sophisticated velvet glove with plenty of steel beneath.

This first novel in the 20-book series is set on the Yorkshire moors, in a village that’s haunted by a 300-year-old legend. The ghostly wail of an infant can be still be heard in Keldale Abbey, a tiny victim of a deadly raid so long ago.

However, Lynley and Havers are on the scene to solve a modern crime: A young girl is accused of killing her religiously devout father with an ax. After admitting to the crime — I did it. And I’m not sorry. — she has refused to utter another word. But the Scotland Yard detectives are not convinced she’s the culprit.

Quirky, suspicious characters abound: the uncle who stands to inherit, the parish priest, an organist who puts on airs, a model-to-be, and an eccentric artist.

It soon becomes clear that everyone in the village is connected in some way to the gruesome murder and simmering fury that precipitated it. As Sergeant Havers gets closer to understanding the truth, she’s forced to acknowledge the dark secrets she harbors in her own heart — and the seeds are planted for what will become a life-defining relationship between her and Lynley.

He had never thought of himself as much of a praying man, but as he sat in the car in the growing darkness and the minutes passed, he knew what it was to pray. It was to will goodness out of evil, hope out of despair, life out of death. It was to will dreams into existence and spectres into reality. It was to will an end to anguish and a beginning to joy. — Elizabeth George