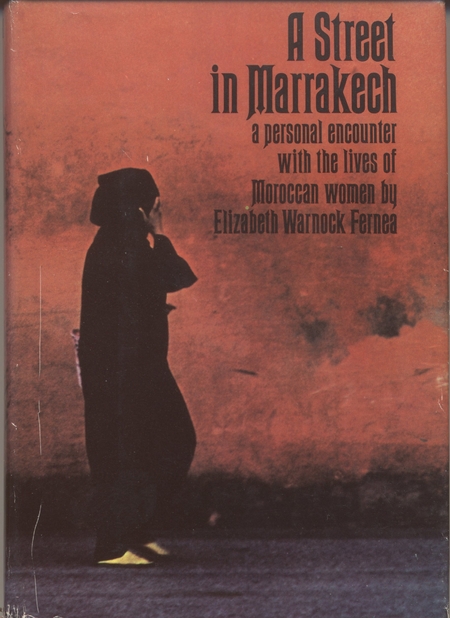 This memoir (382 pages) was published in October of 1975 by Doubleday. The book takes you to Marrakech, Morocco. Melissa read A Street in Marrakech and loved it; it wouldn't be on our site if she didn't recommend it.

A Street in Marrakech

A personal encounter with the lives of Moroccan women

In the 1970s, American author and mother Elizabeth Warnock Fernea moved to Marrakech, Morocco, for a year with her professor husband and three children. She could never have imagined the challenges and adventures that awaited her in the twisting alleys of the city.

She speaks Arabic and has rented a house in the medina (old town), but she and her family don’t fit in. For starters, they speak the wrong dialect — Egyptian, not Moroccan. Although their home is built in the traditional style — a warren of rooms behind windowless walls hiding an internal courtyard — it’s more lavish and has much more space than those of their neighbors. Despite their best intentions, everything about the family says ‘privilege’ and ‘Western.’

Elizabeth has the discerning eye of an anthropologist and the genuine warmth of a regular person who’s simply trying to adjust and make friends in a totally alien environment. In the beginning, she’s met with resistance from the neighborhood women, leaving her confused and isolated, but eventually, the women lower their barriers and welcome her into their community.

As she learns more about the daily lives of her neighbors and friends, we learn along with her. It’s a rare peek inside the rose-colored clay walls of the city. Her stories are funny, touching, and exhilarating, especially her standout recap of a traditional wedding with an enormous home-cooked feast and sisterly henna tattooing session.

This was no fairy tale, I told myself. We were alone, strange, and alien in a strange and alien world. — Elizabeth Warnock Fernea