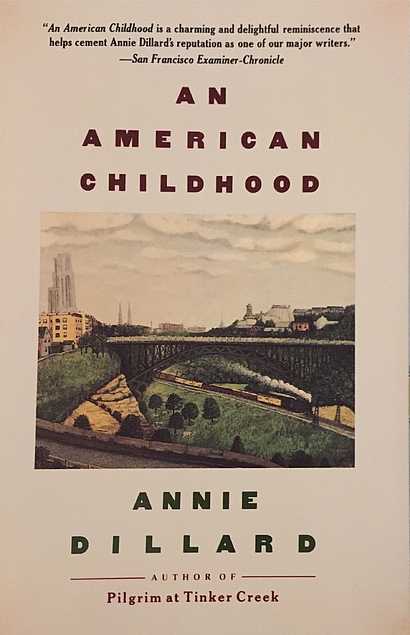 The sentences crackle with energy in Pulitzer Prize winner Annie Dillard’s memoir of growing in 1950s Pittsburgh. Buckle up for a rollicking trip through her childhood with writing so good, it might make you nostalgic for your own hometown.

Dillard’s powers of observation and recall — and, perhaps, imagination — are shocking. She nails what it’s like to be a child of five and 10 and 15. To feel the wonder and fear and beauty of waking up to the world.

She vividly describes the early stages of friendship and her early life as a reader, the skin on her mother’s knuckles that ‘didn’t snap back,’ and the delight (and envy) of watching a neighborhood girl twirl under the streetlight on ice skates after a snowstorm.

Constructed as a series of sort-of essays, this book invites you to dip in and out, spending time with young Annie as she explores the external world and her internal landscape. She takes us to the Pittsburgh of her childhood and its vibrant downtown, and into her fantasies about the French and Indian War, her fascination for drawing, and her fervent, passing interests in rocks, bugs, and the French symbolists.

Each word seems to have been chosen with the utmost care and placed in just the right place in the sentence, so you’re seduced and charmed by Annie’ voice — a voice that is somehow both that of a little girl and an accomplished adult. Her memoir is the story of an all-American girl, growing up mid-20th century — and the making of an award-winning writer who would charm the world with her words.