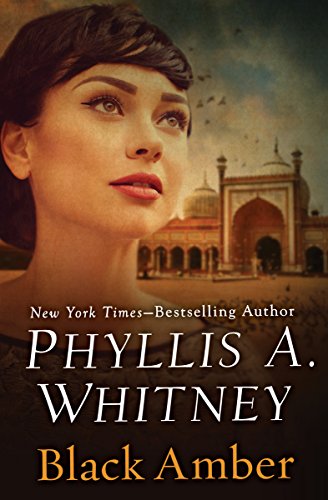 This romantic suspense novel (282 pages) was published in July of 2017 by Open Road Media. The book takes you to mid-20th-century Istanbul. Melissa read Black Amber and loved it; it wouldn't be on our site if she didn't recommend it.

What do you do when your sister drowns under mysterious circumstances in the Bosphorous Strait? The only reasonable thing: Go undercover to Istanbul to investigate, then get caught up in intrigue and romance along the way to the truth.

Our mid-20th-century heroine is Tracy Hubbard. She works at a prestigious publisher in New York City, and she has moxie. She’s also on a mission: Travel to a beautiful villa in Istanbul to assist famous artist Miles Radburn with his book on Turkish tiles and mosaics.

To her big-city boss and her Turkish hosts, Tracey is the very definition of a promising young woman. And she is. But she will not be dissuaded from her personal agenda to uncover what really happened to her sister Anabel.

This story has all you could ask for in suspenseful escapism. Most of the action takes place in a Turkish mansion on the edge of the Bosphorous — with verandas and breezeways that allow for eavesdropping on conversations and shutters rattled by wind in a very unsettling (satisfying) way.

The cast of characters is rich fodder for suspicion. There’s a modern young Turkish woman who may or may not be trusted — and her brother, the medical researcher, with a lab in the house (!). The grande dame of the manor is Sylvana, the French widow of the Turkish family patriarch. She spends her time mixing perfumes and making weighty pronouncements from her perch atop upholstered cushions. There is also a wily handful of servants who skulk in the shadows, appearing at just the right moment.

And then there’s Miles. Oh, Miles. He’s your classic Byronic, problematic man: brooding, handsome, talented, short-tempered. He and Tracy are at odds with each other from the get-go. And just to keep things adequately unsettling, a portrait of the dead sister Anabel hangs on the wall, looming over the action.

While Tracy settles into her new environment and explores the beauty (and danger) of Istanbul, we’re at her side to take in the sights and sounds of Istanbul — with a hint of the Gothic to enhance the experience, like a sugar cube melting into a cup of dark Turkish coffee.

She slipped a coat over her nightgown, turned off the lights in the room, and parted the heavy draperies to step out upon the veranda. The landing area stood empty and quiet, water lapping gently against the steps. The rain had stopped, and in the stillness she could hear distant voices from a village on the nearby shore. A well-lighted ship went past, its engines throbbing as it made its way north from Istanbul toward the Black Sea and the ports of Russia. Overhead ragged clouds raced, a touch of faint moonlight breaking through patches of torn gray. The water drew her eyes — black and seemingly still on the surface, yet with those deep and treacherous currents stirring beneath. Somewhere in the village a man began to sing, and she heard for the first time the minor-keyed lament of Turkish music, repetitive and strange to Western ears, yet somehow haunting. Again a sense of isolation swept over her. She was out of touch with all she knew and was sure of, abroad upon currents that might take her almost anywhere. — Phyllis A. Whitney