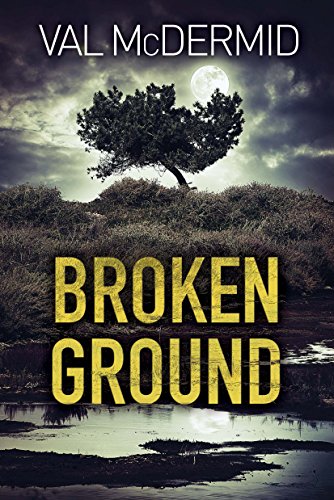 This police procedural (432 pages) was published in December of 2018 by Atlantic Monthly Press. The book takes you to Scottish Highlands and Edinburgh. Melissa read Broken Ground and loved it; it wouldn't be on our site if she didn't recommend it.

Yes, Detective Chief Inspector Karen Pirie can be quite pushy, and she’s as well known for her sarcasm as for her solve rate. But when she’s on the case, she’s unstoppable.

Her specialty is cold cases: ‘I believe people deserve answers. There are few things harder to live with than not knowing the fate of people we love.’

When a preserved body — with a bullet hole between the eyes and Nike sneakers on its feet — is uncovered in a peat bog in the Highlands, she’s sent to investigate. Each clue raises more questions than it answers. And her investigation is complicated by a would-be suitor named Hamish MacKenzie, a ‘magnificent,’ gentleman with a plaid kit and flowing locks. Naturally suspicious, she’s not sure what to make of MacKenzie or his interest in her.

In addition to the bog body, she’s still mourning the death of her husband, sparring with her overbearing boss, and dealing with another violent crime in which she may be an unwitting player.

Val McDermid is a master of carefully plotted procedurals. It’s an enthralling look at the meticulous work of detectives when DCI Pirie gets into the nitty-gritty of tracking down leads, interviewing suspects, and unraveling the decades-old crime. The mystery itself is a good one, with ties to World War II and misdeeds through the decades that eventually identify a surprising villain in the present.

Taut and well-paced, this story could only take place in the Scottish Highlands and Edinburgh with plenty of dramatic weather, sweeping landscapes, and the contemporary pleasures of the Scottish Capital. There’s even a bit of kindness among the hard-boiled police work when Pirie helps a group of Syrian refugees open a coffee shop in their adopted home.

He probably hadn’t deserved what had happened to him. But he’d chosen the road that had taken him there. — Val McDermid