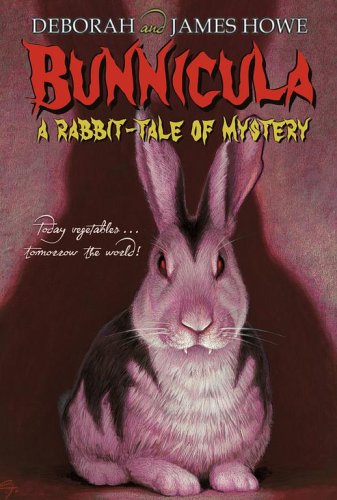 This children's classic (128 pages) was published in May of 2010 by Great Source. The book takes you to a family home over-run with pets. Melissa read Bunnicula and loved it; it wouldn't be on our site if she didn't recommend it.

A Rabbit Tale of Mystery

There are three things you must understand about this children’s novel: It’s narrated by a dog. The cat is a voracious reader. The adopted pet bunny has fangs.

The Monroe family — Mr. and Mrs. plus Toby and Pete — could not be more normal. They eat dinner together in the dining room most nights. The boys get along with each other, until they don’t. The dog Harold and the cat Chester live in harmony. And sometimes, the whole family heads out to the theater together to see a movie.

And that is where the mystery begins.

One night — Halloween, to be exact — the Monroes attend a showing of Dracula and return home with a stray bunny to add to the family. After an intense family discussion, the rabbit is named Bunnicula, and the family settles into life with a new pet.

Everyone that is, except Chester, the cat.

When suspicious events occur in the kitchen, Chester assumes the worst about his new furry sibling. He’s so convinced he’s right, Chester is willing to risk his leisurely pet-hood on the notion that this bunny is a vampire.

The story is necessarily lighthearted. There’s a funny misunderstanding about a stake through the heart, garlic overload, sweetly clued-out parents, and even pet therapy. But at its core, this is a tender story of acceptance and the utter OK-ness of being different.

Bunnicula has sold more than 8 million copies since 1979. It’s been adapted into a stage musical, an animated TV special, and two audio versions, as well as joke books, coloring books, pop-up books, and more. Bunnicula is the work of husband-and-wife writing team James and Debbie Howe. Debbie was diagnosed with cancer a few months into the process of writing the book; she died in 1978, just a year before Bunnicula was published. There are now seven books in the series.

Chester smiled. ‘Lettuce and carrots,’ he said. ‘White lettuce and carrots. I found them hidden behind his cage.’ I was aghast. What did it all mean? Could Chester be right? Was this harmless looking little ball of fluff really a vampire? — Deborah Howe, James Howe