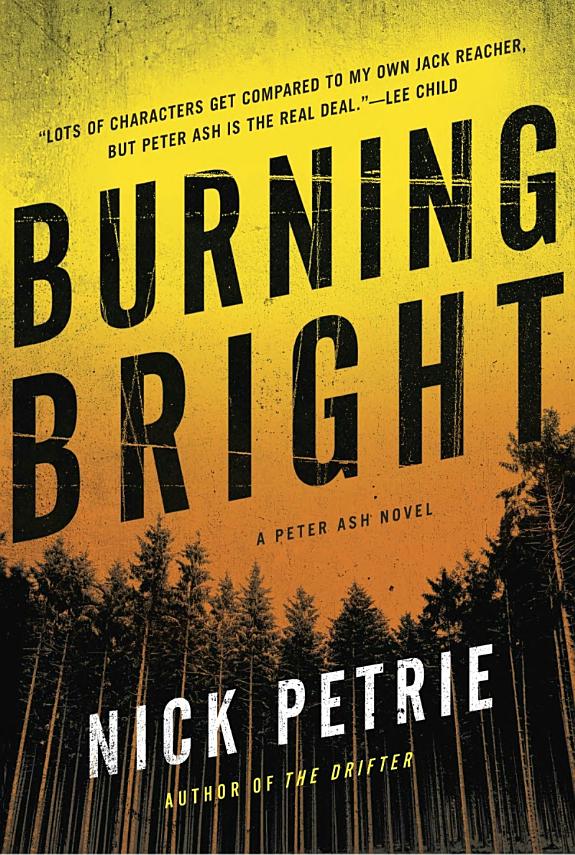 This gripping thriller (432 pages) was published in January of 2017 by G.P. Putnam's. The book takes you to the redwood forests of northern California. Melissa read Burning Bright and loved it; it wouldn't be on our site if she didn't recommend it.

When an author like Lee Child says something like this — ‘Lots of characters get compared to my own Jack Reacher, but Peter Ash is the real deal.’ — it’s a good idea to pay attention. For action, suspense, and can’t-turn-the-page-fast-enough momentum, the Peter Ash books definitely rival the Jack Reacher series.

And for compelling characterization, it feels like Peter Ash might just eke out a win over the venerable Reacher.

A former Marine lieutenant and veteran of the wars in Iraq and Afghanistan, Peter wrestles with what he calls ‘white static’ — PTSD that manifests as extreme claustrophobia. Offices, banks, even cozy homes are fraught spaces, so he takes off for an open-ended hike in the wilderness of California’s Mendocino National Forest.

But thanks to dense fog and his inescapable anxiety, his camp-out is not quite the idyll he had planned. And then a grizzly bear shows up. Saving his hide, but not his supplies, Peter climbs a tree and watches the bear systematically dismantle his backpack. When Peter spies a network of ropes strung among the treetops, he shimmies up with no idea where they lead, who put them there, or if they’re safe. This is the kind of risk he takes on the regular.

Catching his breath on a platform in the green canopy, he finds himself at the unfriendly end of a gun with June, a journalist (and excellent climber), at the other. She’s foiled her own kidnapping but is now hiding out from the bad guys who circle the tree trunks below like the frustrated predators they are.

After bickering banter worthy of a screwball comedy, the two realize they’re stuck with each other and team up to sort out what’s going on. Their perilous adventures take them through the redwood forests of northern California and the landscapes around Seattle, Washington.

There’s a white-knuckle chase through the treetops and shoot-outs on the ground, more than one harrowing car chase, plus dangerous dangling from ropes, double-crosses, a dastardly villain, smart conversations, and a bit of tasteful sexy times.

This story is nonstop action with breathless suspense and solid twists in the plot that will keep you guessing. But there’s also a love story hidden inside this bang-up action-adventure novel. In addition to giving us a hero we can root for, author Nick Petrie delves into the fallout and rewards of the various kinds of love: among the family we’re born with and the one we make, romantic love, love for the self. There’s also a heartwarming bromance that will make you fall hard for both tough guys.

Through it all, Peter anchors the story — a well-intentioned, troubled man with heavy burdens he’s still learning to carry and hard-won skills that are both a gift and a curse.

The rain had stopped sometime in the night, and although the fog was still thick, some quality of the mist had changed. It glowed faintly, green with growth and heady with the oxygen exhaled by giants. He thought maybe the sun had come out, somewhere up there. It turned the forest into something like an ancient cathedral. — Nick Petrie