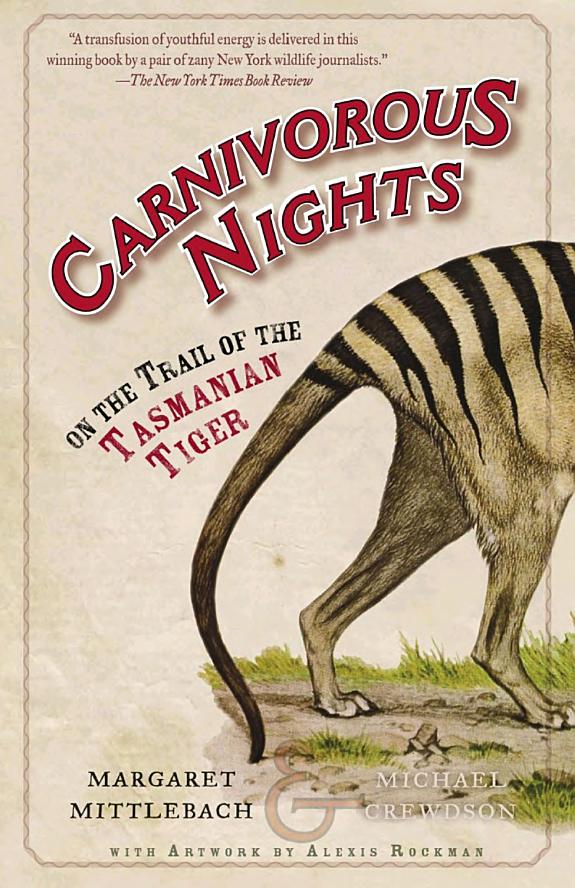 This true adventure tale (336 pages) was published in April of 2006 by Villard. The book takes you to modern Tasmania. David read Carnivorous Nights and loved it; it wouldn't be on our site if he didn't recommend it.

On the Trail of the Tasmanian Tiger

Once upon a time, Tasmania was home to a marsupial that looked something like a large cat and a fox and a wolf, all put together. It was striped, like a tiger — dark streaks against a yellow-brown coat — with jaws that opened so wide, you might imagine it could carry a watermelon in its maw. Known as the thylacine (or Tasmanian Tiger), it roamed Australia for two million years. Then it was wiped out. Or was it?

This is the question that drives our intrepid and outstandingly curious heroes, Margaret Mittlebach and Michael Crewdson. These two are legitimate science nerds in the best possible way. Margaret is a founder of The Secret Science Club that meets in Brooklyn and is ‘chock-full of brainiacs.’

One day, the authors find themselves gazing at the taxidermied Tasmanian Tiger at Manhattan’s American Museum of Natural History. Their thoughts turn to the reported sightings of the thylacine over the years: 400 since 1930, many of them from credible sources like researchers and park rangers. So our curious science nerds think Let’s go find ourselves a thylacine. They’ve soon enlisted an artist friend to join them, and they’re off to Tasmania.

That’s when their adventure and this travelogue begin.

The team roams and rambles all over Tasmania. They encounter the forces of nature: weather and dangerous beasts (leeches! venomous ants!). They meet scientists and cryptozoologists, rangers and bushwhackers; there’s even a team trying to clone the thylacine. It’s a treasure trove of fascinating, perhaps eccentric, people with a shared mission.

Nature artist Alexis Rockman documented all of this — with authentic media. His paints are crafted from local beetles, soil, and fecal matter. Once you get past the potential nose-wrinkling of this organic approach to media, it registers that his illustrations are beautifully arresting. He captures a bat mid-flight and the determined galumphing of a wombat in a few strokes of a brush. 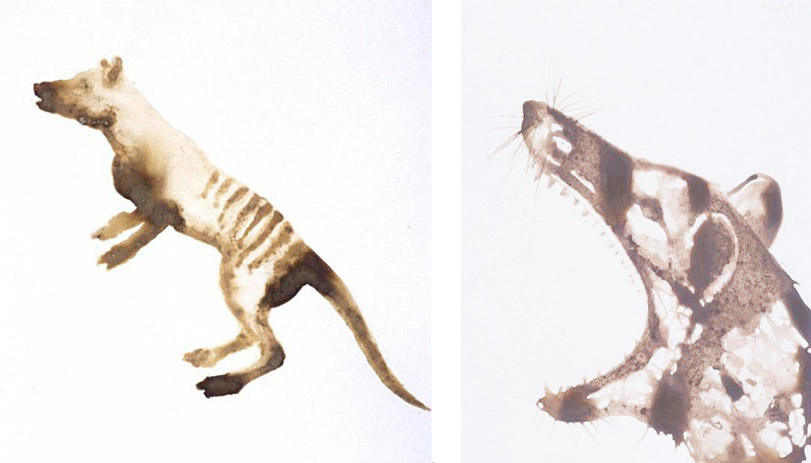 You might come to this book for the adventure or because you, too, love weird science. But the lasting gift of this narrative is hope. It’s a strong argument for the wonder of nature and the joy in believing that, yes, there just might be a stealthy tiger family hiding out in the rugged hills of Tasmania.

Alfred Russel Wallace was a naturalist, a contemporary of Darwin’s, who in 1856 had traveled from Bali to Lombok – a space of just fifteen watery miles – and been in for the surprise of his life. It was as if he had passed through a veil into another world. Species were more different between those two islands than they were across oceans. While Wallace primarily focused on birds in his study of the region, the most obvious difference to us was that the mammals on the other side of Wallace’s Line had pouches. Australasia was filled with odd creatures such as kangaroos and koalas. And Tasmania was home to some of the strangest of all of the region’s animals. Many species that had died out or were barely hanging on elsewhere survived on the island: the Tasmanian devil, the spotted-tailed quoll, the long-nosed potoroo. The idea that Tasmania could still be a haven for the thylacine was tantalizing. — Margaret Mittelbach & Michael Crewdson