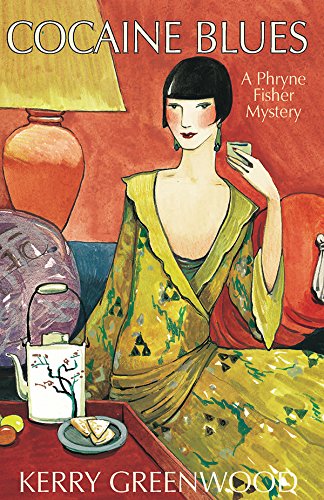 This cozy mystery (326 pages) was published in April of 2006 by Poisoned Pen Press. The book takes you to 1920s Melbourne. Melissa read Cocaine Blues and loved it; it wouldn't be on our site if she didn't recommend it.

The Honorable Miss Phryne Fisher (that’s FRY-nee to rhyme with briny) is stubborn, witty, true of heart, an unapologetic feminist, and able to shoot a villain at 30 paces while dancing the tango. She stands for all that is good — and controversial — in 1920s Australia.

Rather than dither away her days in her luxurious Melbourne manor, Miss Fisher has succumbed to her natural curiosity and fashioned herself a lady detective. She’s also provided a home to a collection of ragtag outcasts that form her endearing found family: a couple of taxi drivers, orphans with sticky fingers but good souls, housekeepers stoic in the face of midnight escapades, and a stray black cat and dog.

With a loving wink to golden-age mysteries, the crimes in these novels tend to be bloodless with twists and turns of plot to keep you guessing. But unlike a traditional cozy, there’s plenty of sex, sarcasm, and sass as Miss Phryne tackles each caper with aplomb.

In this novel — the first installment in the 20-book series; no need to read in order — Phryne is bored with the London season, all those dull dances and blathering colonels. When she’s invited — by one of the aforementioned blatherers — to poke her elegant nose into a mystery in Melbourne, she can’t resist. Soon she’s checked into the glamorous Hotel Windsor and mingling with local society. But it’s not all champagne and caviar.

But, as Phryne is involved, there’s always reason to hope for a happy outcome, as well as plenty of flirting, thrilling escapades, fabulous fashions, and humor in the face of danger. Just another day in the life of Miss Phryne Fisher.

A young man in one’s hotel bedroom is capable of being explained, but a corpse is always a hindrance. — Kerry Greenwood