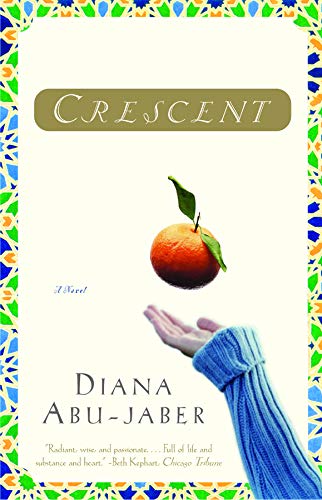 This book (416 pages) was published in May of 2004 by W. W. Norton & Company. The book takes you to a Middle Eastern café in Los Angeles. Melissa read Crescent and loved it; it wouldn't be on our site if she didn't recommend it.

Our heroine Sirine is an Iraqi-American chef with blonde hair, green eyes, and a heart she’s kept carefully tucked away from harm. When she meets Han, an Iraqi literature professor in exile from his home country, she allows herself to fall joyously, recklessly in love.

As Sirine and Han’s intimacy grows, she begins to explore her Iraqi identity as he grapples with the memories of the places and people he left behind. When the real world of politics intervenes in their new love, they both must face the past and a dangerously uncertain future.

Most of the action in this poignant love story plays out in a family-owned Lebanese restaurant in the Westwood neighborhood of Los Angeles known as Tehrangeles. IRL, the area is dotted with signs written in Farsi and infused with the aroma of cumin and cinnamon. In Crescent, students and professors from UCLA, far from their homelands, find comfort and community at Nadia’s Café where Sirine is the cook. They become a family of sorts, bonding over bowls of hummus and the dire news they read in their day-old Iraqi newspapers.

An ode to storytelling and family, this novel weaves an Arabic fairy tale and Middle Eastern food into the narrative in a way that’s reminiscent of Like Water for Chocolate. Sirine’s kebabs and saffron rice become shorthand for feelings that are far too complex and significant to be expressed in words. Identity, the heartbreak of exile, the debt we owe to each other, and the power of love to change everything are explored in prose that’s as buttery and light as phyllo dough.

Sirine puts a forkful of sweet potatoes into her mouth. The potatoes are soft as velvet, the gravy satiny. It is as if she can taste the life inside all those ingredients: the stem that the cranberries grew on, the earth inside the bread, even the warm blood that was once inside the turkey. It comes back to her, the small secret that was always hers, for years, the only truth she seemed to possess—that food was better than love: surer, truer, more satisfying and enriching. As long as she could lose herself in the rhythms of peeling an onion, she was complete and whole. And as long as she could cook, she would be loved. — Diana Abu-Jaber