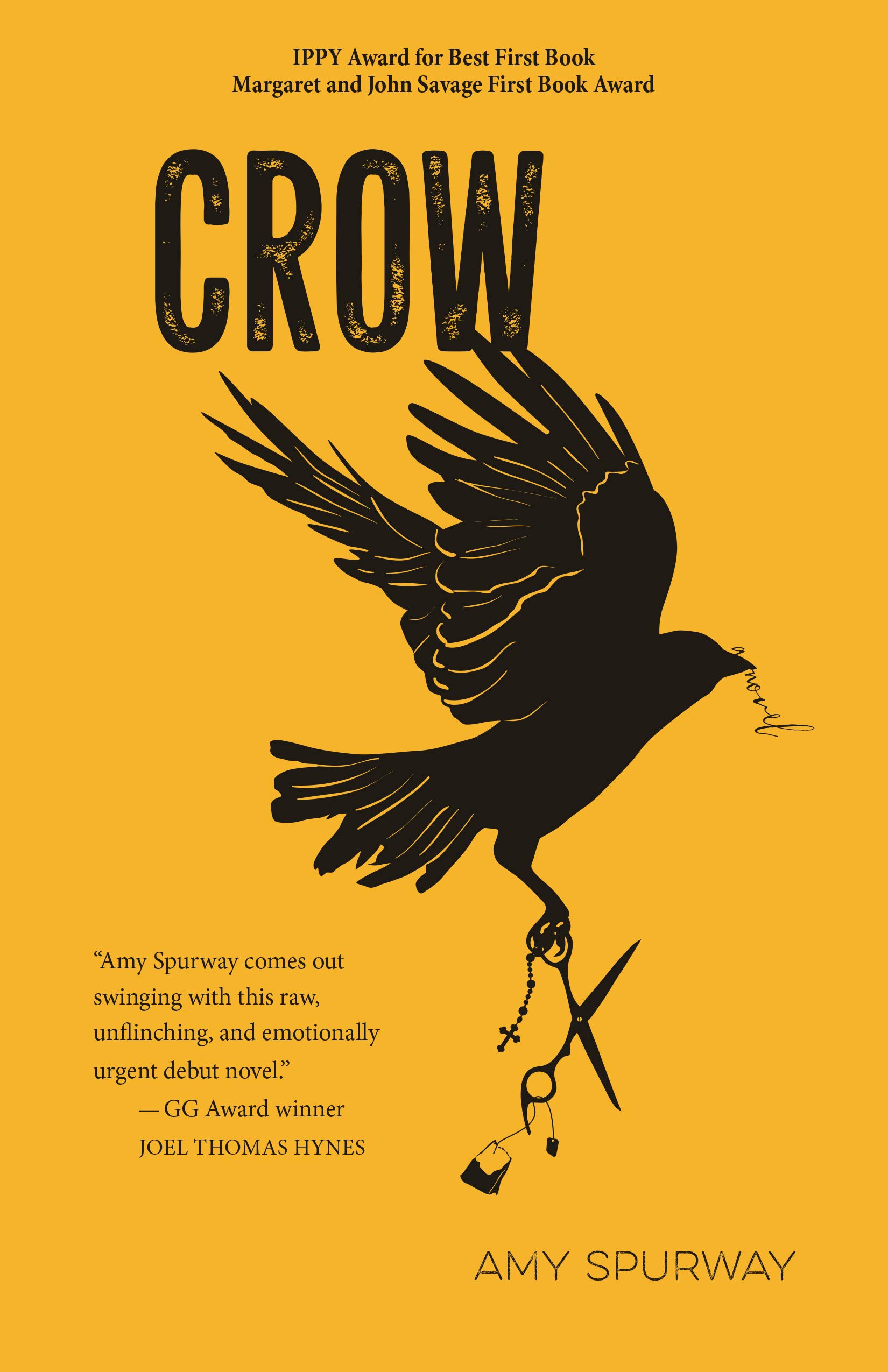 This tragi-comic novel (312 pages) was published in April of 2019 by Goose Lane Editions. The book takes you to Cape Breton, Nova Scotia. Melissa read Crow and loved it; it wouldn't be on our site if she didn't recommend it.

This is the funniest and most life-affirming book about a woman with brain tumors that you’ll ever read. This book about death will make you feel very good about life.

The story is narrated by our heroine, Crow. Her real name is Stacey Fortune from Cape Breton, Nova Scotia. But she’s left behind her small-town life to be a career girl in Toronto. She’s got a fiancée, works in marketing, and wears high heels. It’s all happening. But then things fall apart. Her heart is smashed to bits, and she learns she has three inoperable and unpredictable brain tumors.

So she returns to her childhood bedroom in her mom’s trailer, where her tumors cause rainbow-colored hallucinations, rubbery limbs, and frequent vomiting.

The novel’s conceit is that Crow is writing her memoir, and her voice is pitch-perfect: sarcastic and self-deprecating with just enough vulnerability to make you care about her.

Exhibit A: ‘How do I tell people that my secret to dropping the extra twenty pounds I lugged around most of my life wasn’t hot yoga or detoxing? And then how do I fake optimism and pretend I haven’t leapfrogged over the normal seven stages of grief and invented my own single stage: Surly and Reckless Resignation to Being Doomed.’

On her way to maybe dying, the universe throws a ton of life at Crow. She’s reunited with old friends and old flames, butting heads with her gossipy Aunt Peggy and lovingly bickering with her mom. She gets high by the sea and goes on a date. After she’s compelled to attend a funeral with her best friend, she says, ‘There are two things I now know for certain I do not want at my funeral: family brawls and flowers that smell like cat piss.’

This book is peppered with insight into small-town life in Nova Scotia, with lush descriptions of the landscape and what it means to Crow. She has a strong attachment to the wharf and the surrounding mountains and Loch, the changing seasons, the fresh air. She also vividly describes the industrial part of Cape Breton and its downhill slide after the collapse of the coal industry. Known as Town Town, it’s where locals shop at the mall, and Crow visits the hospital where she endures tests and bad news.

Despite all of that, this novel is a genuinely good time. Crow is the friend who shows her snarky side to most people but reveals her soft underbelly to you. So you forgive her when she messes up and will fiercely defend her against all comers until the end.

How to buy: You can order this book online, directly from the publisher Goose Lane Editions:

Irish wakes are pot luck. But no egg, tuna, or lobster salad sandwiches will be allowed at mine. And no mystery squares or funeral hams. My buffet table will groan with the weight of all my favourites, from the days when I didn’t give a shit about factory-farmed meats and non-GMO organic kale and MSG hangovers and the mid-life spread: suicide spicy chicken wings, donair pizza, poutine, bacon-and-cheese-stuffed bacon-wrapped cheese balls. Deep fried. Dipped in butter. Foods that Stacey-Fortune-in-Toronto avoided because she was scared they’d kill her or make her chubby. But Dying-Crow-Fortune-in-Cape-Breton doesn’t give a fuck. My throng of family, friends, and fans can expect an eclectic mix of my favourite music. Nothing sappy. It’s my party, and you won’t cry if I don’t want you to. Besides, it’s bad luck to start the keening too early. I’ll save the real tear-jerker tunes until the end, just before my wake transitions into the big sleep. — Amy Spurway