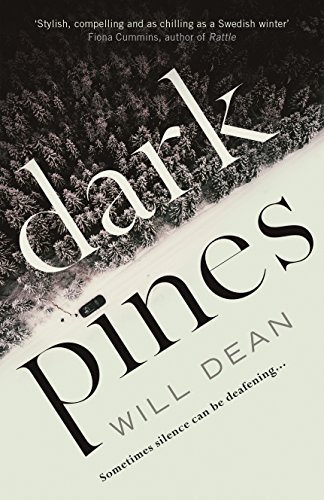 This twisty thriller (336 pages) was published in December of 2017 by Point Blank. The book takes you to contemporary Sweden. Melissa read Dark Pines and loved it; it wouldn't be on our site if she didn't recommend it.

Tuva Moodyson is a handful and a half. She’s deaf, she’s determined, and she’s a reporter with a curiosity that could be deadly. Trapped at a small newspaper in the equally small Swedish town of Gavrik, she gets herself into big trouble.

It’s elk hunting season and gunfire echoes throughout the spruce forest. But imposing mammals aren’t the only victims; a pair of hunters is found murdered in the woods, and - in a super-Scandi-noir move — their eyes are missing.

While investigating the crime for her story — ‘I’ll escape here someday, and I’ll need a portfolio that’ll get me into meetings.’ — Tuva finds a link to the ‘Medusa’ killings, a series of decades-old murders that happened in the same forest.

Soon she’s becoming intimate with the unusual folks of Mossen, a cluster of houses — too small to even be a village — in the woods near where the bodies were found. There’s a menacing taxi driver, a suspicious ghostwriter, a hoarder (anti-hunting, vegetarian) who lives in a caravan, the big-fish-small-pond mill boss, and two witchy sisters — Alice and Cornelia — who handcraft trolls adorned with human hair.

Although she’s terrified of the forest — give her the bright lights and fancy coffee of a city anytime — Tuva sneaks around in the trees, asking uncomfortable questions and generally making a nuisance of herself. Practical, guarded, and prickly, she also seems to be missing all sense of self-preservation, swallowing her fear and trudging on through the shadows to find the truth — even when the serial killer sets its sight on her.

Author Will Dean is a Brit who now lives in ‘a boggy clearing in the center of a vast elk forest’ in Sweden. His prose is appropriately chilly with all the tropes you hope to find in a murdery story set in Sweden: blood and guts, weather that goes on the offensive, free thinkers who prefer the wilds to polite society. But Tuva is unlike other heroines, and Dean makes the forest a primary character, equal parts menace and majesty — the perfect place for a reporter with the moxie to chase down the devil and face her own demons.

Heads up: This is the first book in a series. We also love Black River which gets Tuva into trouble during the annual celebration of Midsomar.

An elk emerges from the overgrown pines, and it is monstrous. Half a ton, maybe more. I stamp the brake, my truck juddering as the winter tires bite into the gravel, and then I nudge my ponytail and switch on my hearing aids… Utgard forest darkens around me, and he stamps his hoof down and breaks a thin veneer of ice covering a pothole. My headlights pick out a splash of dirty water hitting his fur, and then he looks straight at me, and he drops his head, and he charges. — Will Dean