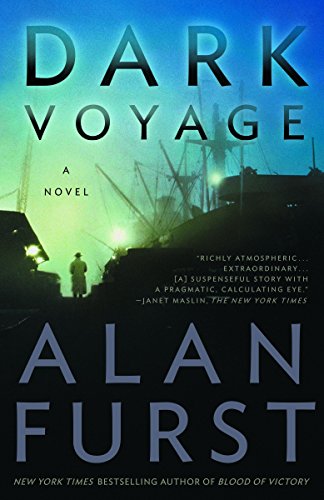 This spy thriller (272 pages) was published in August of 2004 by Orion Pub. The book takes you to a commandeered ship in the North Atlantic during WWII. Melissa read Dark Voyage and loved it; it wouldn't be on our site if she didn't recommend it.

The New York Times calls Alan Furst ‘America’s preeminent spy novelist.’ His stylish spycraft is often compared to standard-bearers of the genre like Eric Ambler and Graham Greene. But we love Furst’s novels for their heroes and heroines: regular people thrust into extraordinary circumstances that test their resolve.

The action of the series takes place between the years of 1932 and 1945. Instead of plumbing the depths of spy agencies or the military, Furst’s novels delve into the hearts of everyday people living under the yoke of war: a jaded journalist, an idealistic actor, a carefree bachelor, even a titled Hungarian.

Although the novels share similar elements, they’re never formulaic, always introducing us to characters who feel like complete people with lives that began before, and will continue, after the words on the page. Each story visits a different location in Europe — Greece, Hungary, Vichy France, Istanbul, Poland — exploring aspects of war outside the traditional espionage action of Germany and Britain.

And oh! his women. Strong-willed, brave, vulnerable — with secrets and ideals of their own. Furst writes some of the best love/sex scenes in the business with plenty of discrete heat that makes it easy to feel the desperate need for human connection and the necessary pragmatism of wartime romance.

In this seafaring adventure, it’s 1941, and the Dutch freighter Noordendam — disguised as a ship from neutral Spain — has been conscripted into spy service by the British. At the helm is Eric DeHaan, the quintessential good man in bad circumstances. He’s a seaman, not a spy, with an abiding love for the ocean and the items on two carefully stocked shelves in his quarters: ‘a forty-book library, his wind-up Victrola, and an album of records in thick paper envelopes.’

Nothing clarifies allegiances quite like wartime, and when questioned about his political leanings, DeHaan replies, ‘I believe in kindness. Compassion. We don’t have a party.’ His crew is a melting pot of nationalities — Jews, Russians, Spaniards, Greeks, Brits, Dutch. All are outcasts in one way or another, and all are treated by their captain with tolerance, compassion, and value.

As the ship makes its way from North Africa and the Mediterranean to the chill of the Baltic Sea, there are moments of breathless tension: pursuers thisclose to a hiding place, recon planes that circle suspiciously overhead, a live mine that bobs just off the hull of the ship. The calm acceptance with which DeHaan accepts these dangers — as his due, as a part of life during the war — makes them all the more dramatic.

But even in war, there are — perhaps, must be — fleeting moments of lightness and camaraderie. When a crewman finds a bootleg copy of the 1933 Busby Berkeley film Footlight Parade in a portside market (labeled ‘FUTLIHT PARED, 1933. JAMS CAGNI/JONE BLONDL’), the crew rigs a canvas screen and watches James Cagney and Joan Blondell under the stars, finding a momentary respite, together, from the grinding fear of their reality.

He grew prouder of his crew as the evening wore on — there was none of the usual griping and bitching, no tales of thievery or fistfights. Nothing quite like danger, he thought, to cure the bullshit of daily life. — Alan Furst

Pssst… enjoy the water ballet of the ‘Human Waterfall’ scene from Bugsy Berkeley’s 1933 film Footlight Parade and imagine watching it on the deck of a ship, in the middle of the ocean, in 1941.