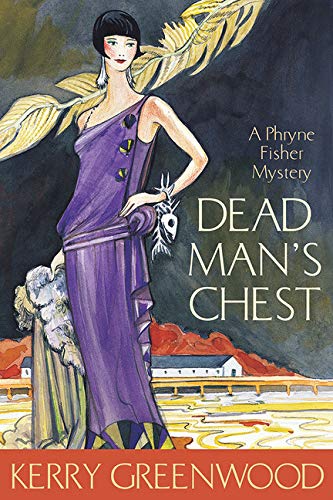 This charming mystery (250 pages) was published in November of 2010 by Poisoned Pen Press. The book takes you to the beach in 1920s Australia. Melissa read Dead Man's Chest and loved it; it wouldn't be on our site if she didn't recommend it.

A few things to know about our heroine Phyrne Fisher: She’s a fashionable feminist in 1928 Melbourne. She’s a wealthy aristocrat, and she’s a private detective who can fly a plane.

She also drives her Hispano-Suiza car like she’s on a race track at all times and wears trousers when it’s convenient. She’d never be caught without her pearl-handled pistol or a bottle of chompers.

In this installment (#18 in the series of 21; no need to read them in order), she and her household — her indomitable sidekick Dot, Phyrne’s adopted daughters, and their dog Molly — decamp to the beaches of Queenscliff for a bit of fun in the sun.

But trouble and Phyrne often arrive in town at the same time.

When the elderly caretakers of their rented house disappar, she’s on the case. The mystery of the missing couple leads to the discovery of a kidnapping, a smuggling ring, attempted murder, the menace known as the Phantom Pigtail Snipper, and, naturally, buried treasure.

Along the way, Phryne is unflappable as ever and adds a new member to her beautifully cobbled-together found family. Oh! There are Surrealists and plenty of cocktails, too. G&T, anyone?

Phryne was getting out of the car. Dot closed her eyes. Miss Fisher was about to happen to someone again. — Kerry Greenwood