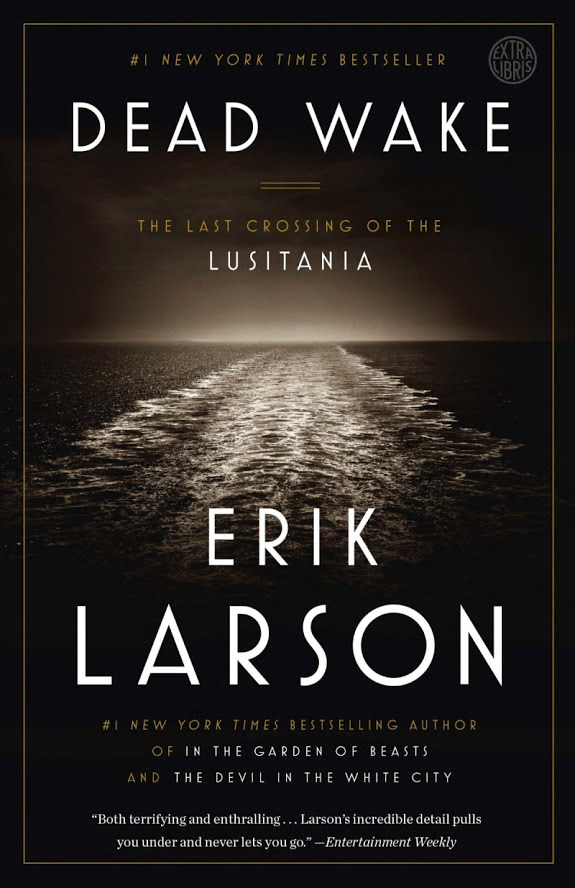 This narrative nonfiction (430 pages) was published in March of 2015 by Crown. The book takes you to the crossing of the Lusitania in 1915. Melissa read Dead Wake and loved it; it wouldn't be on our site if she didn't recommend it.

The Last Crossing of the Lusitania

You probably remember the name of the ship Lusitania from history class, but in Dead Wake, Eric Larson works his exceptional brand of storytelling magic to illuminate new facts — and suddenly, you are right on that ship.

In 1915, there wasn’t a luxury liner tougher or faster than the Lusitania, and she was crossing from New York to Liverpool with a record number of souls aboard. The world was in the throes of WWI, but Captain William Thomas Turner had confidence in his ship’s abilities — and faith in the gentlemanly rules of warfare that had protected civilian vessels throughout his career.

But then a number of elements, ‘myriad factors, large and achingly small’ — hubris, ambition, politics, fog, and deadly secrets — converged to produce a great tragedy.

With his unerring eye for the most moving and relevant details, Larson makes real people of everyone involved, from the passengers on board the fated ship to the behind-the-scenes players in British intelligence, on German U-Boats, and at the White House. He shares intimate particulars about their lives, their families, their dreams, and even the personal treasures and clothing they brought aboard the Lusitania.

This is not a dusty story from history, but a thrilling and haunting cautionary tale of unchecked pride and bad luck. Awash in glamour and unrelenting suspense — even though we know the sad truth of the events — this book is gripping from the ship’s optimistic beginning to its tragic end.

There were parents sailing to rejoin their children, and children to rejoin their parents, and wives and fathers hoping to get back to their own families, as was the case with Mrs. Arthur Luck of Worcester, Massachusetts, traveling with her two sons, Kenneth Luck and Elbridge Luck, ages eight and nine, to rejoin her husband, a mining engineer who awaited them in England. Why in the midst of great events there always seems to be a family so misnamed is one of the imponderables of history. — Erik Larson