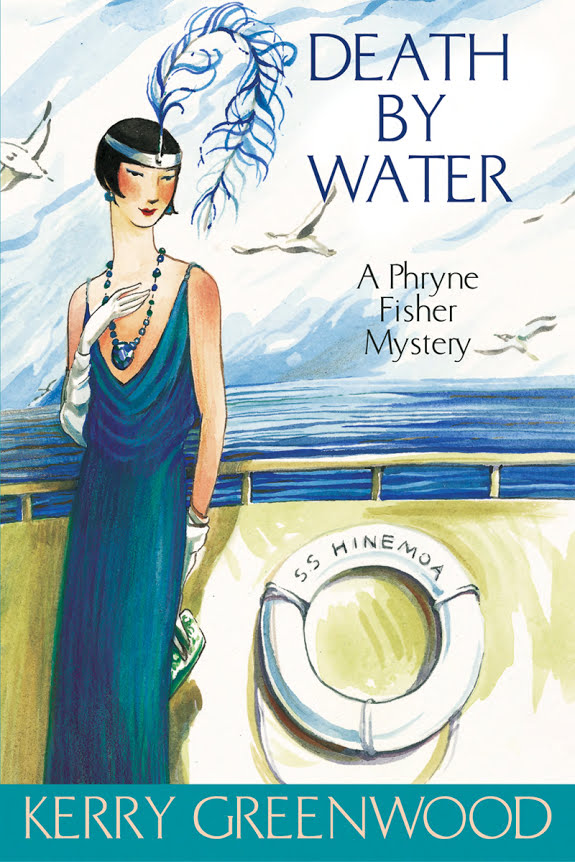 This light-hearted mystery novel (270 pages) was published in December of 2008 by Poisoned Pen Press. The book takes you to New Zealand on a luxury cruise ship. Melissa read Death by Water and loved it; it wouldn't be on our site if she didn't recommend it.

Phryne Fisher is a heroine we can believe in. An independent lady-detective in 1928 Melbourne, she’s an equal-opportunity lover and prone to wearing pants (all the easier to shimmy up a drainpipe). She keeps a pearl-handled pistol in her evening bag, and she is not here for any of your nonsense.

Although Phryne is very, very rich, she’s got the bleeding heart of a true socialist beating inside her haute couture frame, and she can dispatch thugs of all shapes, sizes, and creeds without mussing her perfect chin-length bob.

In this adventure (#15 in the series of 21; no need to read them in order), she’s sailing from Melbourne to New Zealand on a luxury cruise ship to catch a jewel thief. And, probably, to crack some skulls and break some hearts along the way.

Undercover on the S.S. Hinemoa, Phryne flaunts the Queen of Sapphires — a large, sparkly, irresistible stone — as bait to draw out the thief and soon learns that each of the passengers and crew is harboring secrets.

As always, Phryne is aided by her companion Dot, a spunky Holmes-esque sidekick whose sheltered upbringing is challenged by Phryne’s escapades. ‘In a household which contained, at times, lost revolutionaries, grieving Latvian widows, cane cutters, clowns, Chinese lovers, and that lady from the carnival and her snake, Dot had no race prejudices left. The small number she had started with had been so comprehensively disproved that she had made a philosophical decision to take everyone as they appeared until proven otherwise.’

As the ship glides west through the Tasman Sea, life aboard takes on a rhythm of gourmet meals, top-shelf cocktails, cheap wine, dancing, flirting, and midnight dalliances. There are also sexy jazz musicians, an attempted drowning, blackmail, a sneaky tomcat, beastly husbands, haunting stories of shipwrecks, and a dramatic Māori war dance.

Just as you’d expect with the Honorable Phyrne Fisher, it’s all very glamorous — and potentially deadly.

Phryne was angry. The only way that an informed observer could tell was that her lips were a little tighter and her winged nostrils flared as though she was smelling out her prey. Phryne in that mood made Dot uncomfortable. Her employer was about to happen to someone. — Kerry Greenwood