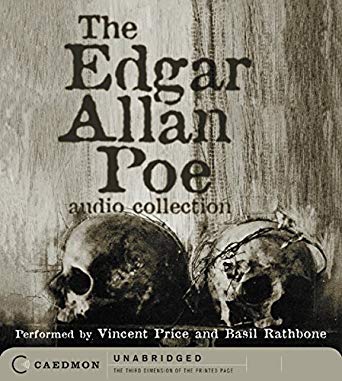 This spooky collection (5 hours and 31 minutes) was published in October of 2000 by HarperAudio. The audiobook takes you to eerie places in the mind. Melissa listened to The Edgar Allan Poe Audio Collection and loved it; it wouldn't be on our site if she didn't recommend it.

Edgar Allan Poe’s stories and poems are almost synonymous with Halloween. Thick with dread and foreboding, his works explore the unspeakable thoughts that haunt our minds. In Poe’s realm, the rooms are gloomy, the windows are drafty, the floors are squeaky, and the hearts are barren.

Although his prose is irresistibly eerie on the page, Poe’s output is practically an argument for audiobooks: He did like his sentences to go on (and on). In this atmospheric audiobook, his dark visions are interpreted by veteran stage and screen actors Basil Rathbone and Vincent Price.

Basil Rathbone first gained fame on the U.K. stage as a Shakespearean actor. He eventually appeared in more than 70 movies — costume dramas, swashbucklers, horror films — and he is best known for playing Sherlock Holmes in 14 Hollywood films between 1939 and 1946.

Vincent Price was an American actor most beloved for his roles in horror films, although he starred in scores of films in all genres. In the 1950s, he memorably played a homicidal sculptor in House of Wax. That horror debut was followed by a decade of spooky movies, including iconic performances in House on Haunted Hill, House of Usher, The Pit and the Pendulum, The Raven, and The Masque of the Red Death.

All of those tales and more are found in this collection of 20 stories and poems: The Fall of the House of Usher, The Pit and the Pendulum, The Masque of the Red Death, The Tell-Tale Heart, The Black Cat, The Cask of Amontillado, and — our two favorite poems — The Raven and Annabel Lee.

Fair warning: There are no introductions to the stories and poems, some of them are slightly abridged, and the sound quality has a slight vintage crackle (that we find appealing). We love this one for its marriage of performers and material. The actors’ deliveries celebrate the melodramatic content of Poe’s stories and poems, and their vocal timbre makes his language dip and soar like a leaf caught in the wind. The performances made the backs of our necks tingle, and there is no higher praise than that.

TRUE! — nervous — very, very dreadfully nervous I had been and am; but why will you say that I am mad? The disease had sharpened my senses — not destroyed — not dulled them. Above all was the sense of hearing acute. I heard all things in the heaven and in the earth. I heard many things in hell. How, then, am I mad? Hearken! and observe how healthily — how calmly I can tell you the whole story. — Edgar Allan Poe, ‘The Tell-Tale Heart’