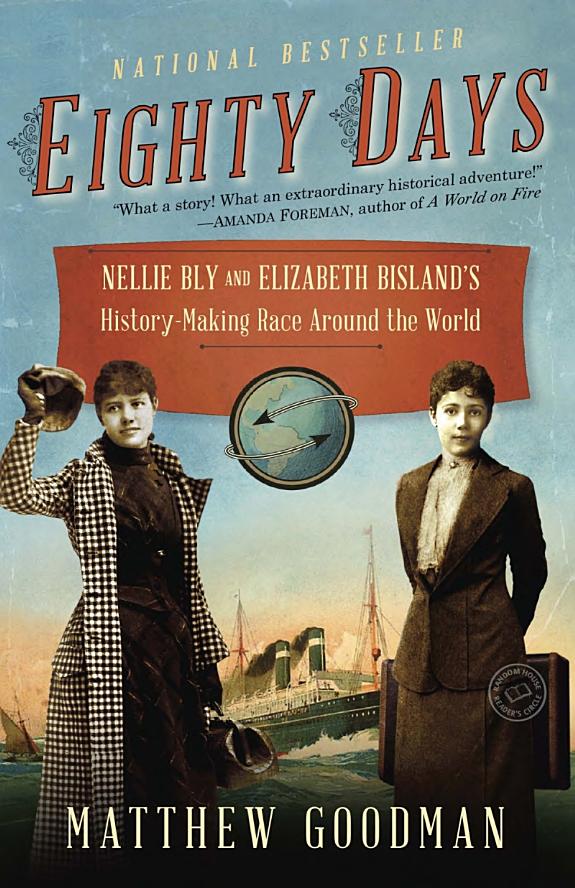 This adventure story (480 pages) was published in February of 2013 by Ballantine Books. The book takes you to all corners of the globe in 1889. Melissa read Eighty Days and loved it; it wouldn't be on our site if she didn't recommend it.

Nellie Bly and Elizabeth Bisland's History-Making Race Around the World

This is a rip-roaring adventure story about two young women journalists who traveled solo around the world in 1889 — when neither being a journalist nor traveling alone was a respectable or safe thing for a lady to do.

Jules Verne’s novel Around the World in Eighty Days is a fantasy adventure starring the (privileged, white, male) Phileas Fogg. In 1889, a young lady reporter Miss Nellie Bly, armed with determination and one traveling bag (measuring just 16 by 7 inches), set out to loop the globe and make history.

Unbeknownst to her, an equally gifted and perhaps, more gentile young lady, one Elizabeth Bisland, also embarked on a jaunt around the globe. The race was afoot!

These two women traveled 28,000 miles — on steamships, trains, carriages, sedan chairs, rickshaws, gharrys, and sampans — to return home forever changed by their experiences. And the world of journalism was changed along with them.

Lady reporters, as they were known in the late 1800s, were generally relegated to articles about recipes, fashion, and parties. But Nellie Bly was equal parts pluck, gumption, and confidence. She was fresh off her undercover expose of Blackwell’s Island Asylum for Joseph Pulitzer’s World newspaper. She had another big idea: Given the popularity of Verne’s novel, she would trace Phileas Fog’s route and complete it in just 75 days. Accolades for her, attention for the World. Success all around.

But meanwhile, across town, the editor of The Cosmopolitan magazine was in a tizzy. He couldn’t allow the World have all the glory. So he decided to send his own lady reporter around the globe. With barely time to pack her trunk — traveling light was not an option for this southern belle — Elizabeth Bisland embarked on Nellie’s route in the opposite direction.

Neither Nellie nor Elizabeth had ever been aboard an ocean liner or left the United States. They journeyed alone, at a time when travel was a combination of unmatched luxury and brutal discomfort. There was seasickness and cold mail trains, perilously close connections between transports, and overly confident would-be suitors.

The girls went from New York to England and Italy and Egypt and across the Indian Ocean. They visited a tea plantation in Sri Lanka and shopped in the markets of Hong Kong. They ate curry! And in France, Nellie Bly met with Jules Verne himself. ‘If you make it in 79 days,’ he told her, ‘I shall clap with both hands.’

Author Matthew Goodman puts his detailed research to good use, creating cliffhangers and the urgency of an ever-ticking clock, pressing the girls forward as they navigate wildly unfamiliar and exotic territory. He also transports us into 19th-century journalism, rife with spectacle, one-uppery, backroom deals, and legitimate concerns surrounding women trying to break into a man’s world.

Nellie and Elizabeth are, by turns, inspiring, frustrating, bold, provincial, curious, snobbish, and endearing. It’s impossible not to root for them, even when their actions seem silly. And what happened to each of them in the aftermath of their escapades is a poignant (and fitting) coda to their once-in-a-lifetime experiences.

Psst… This is a good pairing with Sensational: The Hidden History of America’s Girl Stunt Reporters by Kim Todd.

On the surface the two women, Nellie Bly and Elizabeth Bisland, were about as different as could be: one woman a Northerner, the other from the South; one a scrappy, hard-driving crusader, the other priding herself on her gentility; one seeking out the most sensational of news stories, the other preferring novels and poetry and disdaining much newspaper writing as ‘a wild, crooked, shrieking hodge-podge,’ a ‘caricature of life.’ Elizabeth Bisland hosted tea parties; Nellie Bly was known to frequent O’Rourke’s saloon on the Bowery. But each of them was acutely conscious of the unequal position of women in America. Each had grown up without much money and had come to New York to make a place for herself in big-city journalism, achieving a hard-won success in what was still, unquestionably, a man’s world. More than anything else, of course, the two women were to be linked forever by unique shared experience: partners, in a sense, in a vast project that for months would captivate the United States, and much of the world besides. Bly and Bisland raced around the globe on the most powerful and modern forms of transportation yet created, the oceangoing steamship and the steam railroad… They traveled through a world defined by custom and deformed by class, in every country they visited, and even on the ships and trains they used to get there. Nellie Bly and Elizabeth Bisland were not only racing around the world; they were also racing through the very heart of the Victorian age. — Matthew Goodman