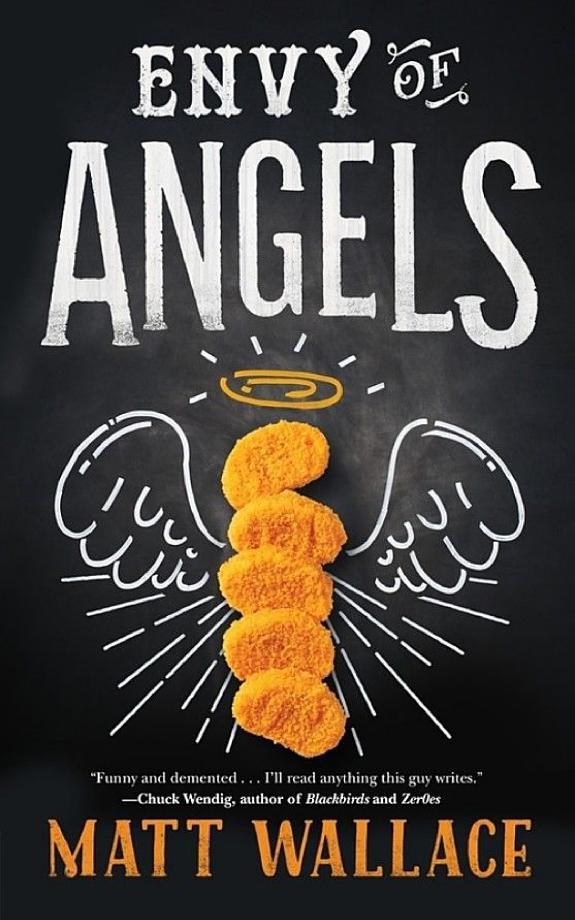 This comic fantasy (230 pages) was published in October of 2015 by Tor.com. The book takes you to a supernatural catering company in NYC. Melissa read Envy of Angels and loved it; it wouldn't be on our site if she didn't recommend it.

A dinner so delicious it’s to die for? That is literally the case at Sin du Jour, the supernatural catering company.

In this tasty urban fantasy — the first in a series of seven novels — superstar chef Byron ‘Bronko’ Luck is the culinary genius behind a catering company with dangerous clientele: demons. When two chefs, roommates Lena and Darren, are banned from the kitchens of upscale restaurants in Manhattan, Bronko makes them an offer they can’t refuse.

Soon they’re introduced to the diabolical world of paranormal recipes, getting to know co-workers who are not entirely human, and practicing arcane culinary techniques. There are devilish gang wars, zombie clowns, a genie, sublime angels, a secret pantry with unusual ingredients, a mysterious stray dog, an enormous enchanted chicken, and so many other reasons to be very, very afraid.

Our hapless heroes are joined by a piquant cast of supporting characters, including a crew of catering veterans who regularly go hunting for rare ingredients. And all of them, humans and beasts alike, are on a mission to find a particular secret ingredient for the most important catering job in the universe.

Author Matt Wallace has created a tasty alternate world, shining a flashlight into the shadowy corners of the New York culinary scene. His descriptive prose and snappy dialogue spice up the everyday machinations of a bustling commercial kitchen. The uncanny happenings at Sin du Jour are as funny as they are alarming. And they’re served up with a side of astute observations about human consumption and capitalism.

It’s all so much fun, it’s kind of sinful.

They being by sampling mini-oxtail taquitos covered with the absolute hottest mole negro either of them has ever tasted… The second appetizer is a tiny Korean short rib pizza with some type of sriracha-based sauce on top. Its flavor is remarkable but also overwrought with surprising heat. The third dish is a bite-sized stuffed pepper.

‘Who are your clients, Chef? Jamaican pepper farmers?’

‘They like their heat,’ he says simply. — Matt Wallace