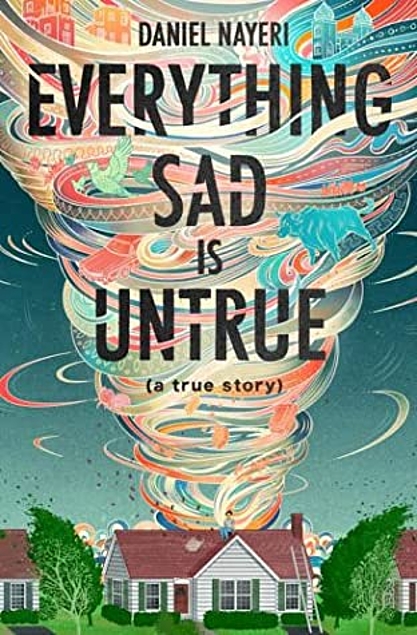 This stunning novel (368 pages) was published in August of 2020 by Levine Querido. The book takes you to Iran and Oklahoma. Melissa read Everything Sad Is Untrue and loved it; it wouldn't be on our site if she didn't recommend it.

Everything Sad Is Untrue

The hero of our story is Khosrou, but everyone calls him Daniel. He’s got dark skin, he’s hairy, and his butt is big. He’s Iranian but now finds himself living in Oklahoma. This is his unforgettable story, told in his inimitable voice. Prepare to have your heart stolen.

The story opens with Daniel telling a story to his middle school class in his new hometown. ‘All Persians are liars, and lying is a sin. That’s what the kids in Mrs. Miller’s class think, but I’m the only Persian they’ve ever met, so I don’t know where they got that idea. My mom says it’s true, but only because everyone has sinned and needs God to save them. My dad says it isn’t. Persians aren’t liars. They’re poets, which is worse.’

As he replies to prompts from his teacher, Daniel tells the story of his life so far. His narrative swoops and swirls through time and place as he tries to help his classmates — and himself — makes sense of who he is and where he comes from.

He recalls his scant, precious memories of his grandparents in Iran, and we learn why he, his mom, and sister ended up in Oklahoma — and his father did not. We also get snapshots of Daniel’s troubling new life in the United States. With a knowing wink at the storytelling tradition of One Thousand and One Nights, Daniel’s personal recollections are embellished with events from Persian history and traditional folk tales.

Funny, biting, and sad, Daniel’s voice is a combination of wide-eyed innocence and pragmatic experience that represents the 10-year-old refugee he was and the measured adult he will become. It’s often laugh-out-loud funny with a bitter twist that highlights Daniel’s harsh reality: ‘Nobody in America likes grammar Nazis. Not even the neo-Nazis who live in Owasso, Oklahoma.’

But there’s a sweetness, too. Daniel is a good boy with good intentions and a pure heart. And though there has been plenty of discord in his young life, Daniel’s story is infused with hope and love.

The quick version of this story is useless. Let’s agree to have a complicated conversation. If you give me your attention — I know it’s valuable — I promise I won’t waste it with some “poor me” tale of immigrant woe. I don’t want your pity. If we can just rise to the challenge of communication — here in the parlor of your mind — we can maybe reach across time and space and every ordinary thing to see so deep into the heart of each other that you might agree that I am like you. I am ugly and I speak funny. I am poor. My clothes are used and my food smells bad. I pick my nose. I don’t know the jokes and stories you like, or the rules to the games. I don’t know what anybody wants from me. But like you, I was made carefully, by a God who loved what He saw. Like you, I want a friend. — Daniel Nayeri