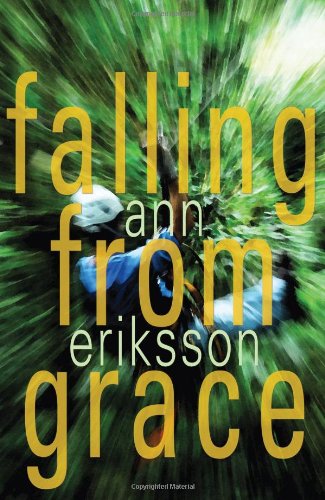 This mashup of family saga and eco-thriller (256 pages) was published in January of 2010 by Brindle & Glass Publishing. The book takes you to the forests of Vancouver Island. Melissa read Falling from Grace and loved it; it wouldn't be on our site if she didn't recommend it.

Meet Faye, an entomologist dedicated to studying the mites that live in the forest canopy of Vancouver Island. She’s prickly, intelligent, driven, and unsentimental. She’s also 3 1/2-feet tall and out of patience with the world’s ignorance about dwarfism and science and a lot of other things she holds dear.

In other hands, this novel could easily have gone wrong, finding clunky life lessons in the story of a little person studying the world’s tiniest arachnids in the tops of the tallest trees on the planet. Instead, we get a nuanced portrait of a sometimes difficult woman whose life purpose is to be among the trees.

Faye is fulfilling that purpose with her assistant Paul, working and sleeping in the forest. But one day, their peaceful campsite is invaded by a ragtag group of activists protesting a logging corporation. It seems that the multinational is cutting trees in a protected part of the forest. Despite herself, Faye is drawn into the conflict, caught between the logging boss she knows and the activists she does not.

Hot tempers and murky motives abound. When it all finally boils over, a tragic, violent crime is committed, dropping a bomb into Faye’s life. There is now a clear Before and After for Faye, not unlike the way a fire or drought leaves its mark on the rings of a tree. In the After, Faye is forced to find new depths of empathy and understanding to navigate her uprooted world.

Author Ann Eriksson is a biologist and ecologist, born and raised in Canada. She now lives on a small island tucked between Vancouver Island and the mainland, so she and her character Faye know what they’re talking about. Eriksson’s prose is rich with fascinating science. Instead of shying away from the technical details, they’re woven into the narrative to help us understand Faye’s passion for her work. The explanation of why mites are integral to the food chain is surprisingly riveting stuff. And Faye is not without a sense of humor about her specialized field of study:

‘At parties, the conversation crashed when I mentioned mites, and people excused themselves to get another drink. Or asked if mites really lived on eyelids and cleaned crap from the eyeballs. ‘Yes,’ I would explain, barely hiding my annoyance. ‘Mites do live on eyelids and in dust bunnies.’ I didn’t go to many parties.’

This unusual novel mashes up the elements of a family saga and ecological drama with a whisper of a coming-of-age story. It delivers on its promise of love for trees and character development with page-turning suspense and not a little bit of heartbreak — all wrapped up in a forgiveness-infused ending you won’t soon forget.

I climb trees for a living. My mother, Grace, a woman of great compassion and little tact, claims I climb trees to make myself taller. She likes to relate to anyone who will listen how as a child I climbed anything, my stubby arms and legs wedged crablike between door frames, scuttling up the lattice to the garden, the china cabinet, the drainpipe to the roof. She is mistaken, my intent not to be taller. When my feet leave the ground, I rejoice in the release from gravity. If I could fly, I might, like the marbled murrelet, never touch the earth, setting my feet only on the highest branches of the tallest trees. What I seek most is solitude in the company of trees. Connection with another being. — Ann Eriksson