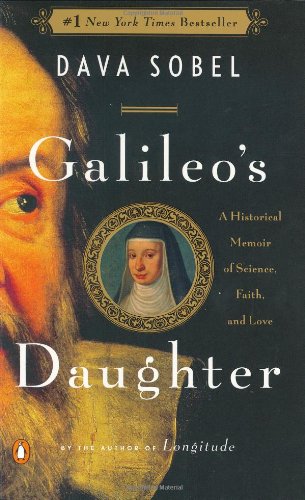 This thrilling historical account (432 pages) was published in April of 2011 by Penguin. The book takes you to Renaissance Italy. David read Galileo's Daughter and loved it; it wouldn't be on our site if he didn't recommend it.

A Drama of Science, Faith and Love

If your familiarity with the Renaissance scientist Galileo is limited to a ninth-grade history class and that totally awesome Indigo Girls’ song, this is the book for you.

Born in 1564, Galileo Galilei is known as The Father of Physics and sometimes The Father of Modern Science. He did not invent the telescope, but he made it his own, grinding on the math to produce a better telescope. And then he looked up, and his reward was the craters of the moon, the phases of Venus, and the stars of the Milky Way. He may have been the first person to get a sense of how unimaginably vast the universe is.

His curiosity led him to believe that the Earth revolved around the sun. At that point, at least in Europe, it was commonly held that the sun revolved around the Earth: It said so in the Bible, and the Bible was never wrong. Galileo would eventually run into trouble with the Pope — humiliated and condemned for his insight and his genius. He was ultimately confined to a villa outside of Florence to live the rest of his life.

So, that’s Galileo, the scientist.

This book presents a picture of Galileo, the human. It’s a retelling of his life illuminated by letters exchanged between him and his daughter Maria Celeste (as in Celestial, a nod to her father’s relationship with the stars).

Part of the immense attraction of this book is the sense of place and time contained in the letters. There’s Galileo and his world-class problems, but there’s also a father and a daughter talking about their lives: I have a toothache. Here’s what I ate today. I really want to move into a better room; can you help?

The evidence in this narrative strongly suggests that Galileo was pleasant to be around. He was a funny, smart, charming man who was beloved as a teacher and kept friends his entire life. He played music. He could draw. People who met him never forgot it.

This book also makes it very clear that Galileo was a man of faith. He was raised Roman Catholic and held those beliefs his entire life. His two daughters both became nuns. He believed in the power of prayer — but he also believed that God placed mysteries in the universe for people to solve.

If you are generally interested in science or curious about Florence in the 16th century, it’s a pleasure to spend time with Galileo and Maria Celeste.

Even more than he regretted her opposition, he dreaded the drawing of battle lines between science and Scripture. Personally, he saw no conflict between the two. — Dava Sobel