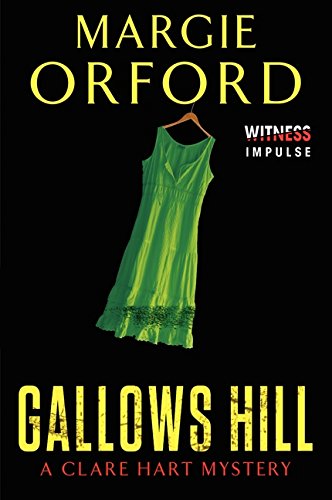 This murder mystery (384 pages) was published in August of 2014 by Witness Impulse. The book takes you to Cape Town. Melissa read Gallows Hill and loved it; it wouldn't be on our site if she didn't recommend it.

Hey! How’d you like to tag along with a formidable investigator while she unearths clues and tracks down leads in the grit and crime of Cape Town?! Making the bad guys pay will be supremely satisfying, and you may put some ghosts to rest along the way.

Meet Dr. Clare Hart and her paramour Riedwaan Faizal. He’s Captain of the Organized Crime and Drug Unit in Cape Town. Clare is an investigative journalist and police profiler. Each of them is a badass in their own right. When they team up, they’re pretty much unstoppable.

In real life, the area of Cape Town known as Gallows Hill was the 18th-century spot for public executions. After the deed, the remains of the convicted were left on public display, their bones falling for informal burial as time carried on without them.

When the book opens, a building project on Gallows Hill unearths a pile of bones. Construction immediately comes to a halt so archaeologists can examine the remains. Then another body is found. But this one is from just a few decades ago. It’s a woman wearing a green silk dress. She was murdered. Now Clare Hart is going to track down who did it and make them pay.

Because Clare’s superpower is that the murder of women makes her very, very angry. She uses that to fuel her investigation as she talks to experts about the physical evidence and interviews suspects.

As Clare circles the culprit, awful truths come to light about 18th-century convictions, the slave trade, Apartheid, and the 1985 State of Emergency that disappeared people regularly. Arrested? In hiding? Murdered? Does anyone care?

Author Margie Orford has been called the Queen of South African Crime Fiction —and it’s justified. This page-turning procedural punches you in the face with intense feelings. Through her character Clare, she stands up for women and against the injustices of South Africa’s past.

‘I haven’t thought about that place for 20 years, maybe more. Why are you asking about it?’

‘The warehouse you built was recently demolished,’ explained Clare. ‘A young woman’s body was found under the slab.’

‘The whole place was full of skeletons,’ said Gonzalez. ‘I could hardly get my staff to work, they were so spooked. Gallows Hill. Flat as a pancake, the place they used to hang all kinds of riff-raff in the old days. Every time we dug we’d find more bodies. The owners just told us to shut up and build. Times were tough, so we did.’

‘Nothing to write home about in South Africa.’ — Margie Orford