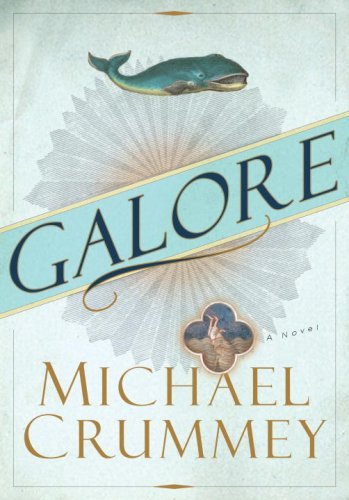 This literary fairy tale (352 pages) was published in March of 2011 by Other Press. The book takes you to Newfoundland. David read Galore and loved it; it wouldn't be on our site if he didn't recommend it.

This multi-generational family epic spans life in Newfoundland from the 1700s to the early 1900s, spinning a yarn that combines elements of fantasy, folk tales, and literary realism.

The story begins in glorious folk-tale fashion when a man is found alive inside a whale. There is also a woman who’s probably a witch — known only as Devine’s Widow — and a ghost haunting the proceedings. Let’s call it Canadian magical realism.

As you might expect, the mute albino man who emerges from the belly of the whale on the beach has a lasting impact on the community. And as we move through time — and a few hundred pages of the story — with these characters, we’ve traversed four generations and emerged in the time of hospitals, mass transit, and world war.

Like David Mitchell’s beautiful and tricky novel Cloud Atlas, the different eras in this book have different voices, although they roll out gradually, like the tide, and some elements remain consistent throughout. A road named in the first chapter plays a significant role in the last. The book starts and ends on the same holiday. But the magic and superstition ebb as science and industry flow.

This beautifully told tale is mostly about the making and meaning of a family — how hard that process can be, both then and now. It’s also about living in the then and the now; the ways they’re similar and different, and how we swirl in the same moments, time after time, through the centuries.

The author Michael Crummey, born a Newfoundlander and living there still, writes about his home with a combination of grace and respect that make you yearn to visit. He started out as a poet, and that talent is evident in this book: He coins new words, giving names to previously unnamed things, so although you won’t find a home known as a ‘plain stud tilt’ in the dictionary, you will feel as if you’ve seen one.

This story may make you nostalgic for the days when superstition held sway and starvation was a real possibility; in Crummey’s hands, it’s all quite romantic.

King-me pushed his way past the laughter of the bystanders, saying he’d have nothing more to do with the devilment. But no one followed after him. They stood awhile discussing the strange event, a fisherman washed overboard in a storm or a suicide made strange by too many months at sea, idle speculation that didn’t begin to address the man’s appearance or his grave in the whale’s belly. They came finally to the consensus that life was a mystery and a wonder beyond human understanding, a conclusion they were comfortable with though there was little comfort in the thought. The unfortunate soul was owed a Christian burial and there was the rest of the day’s work to get on with. — Michael Crummey