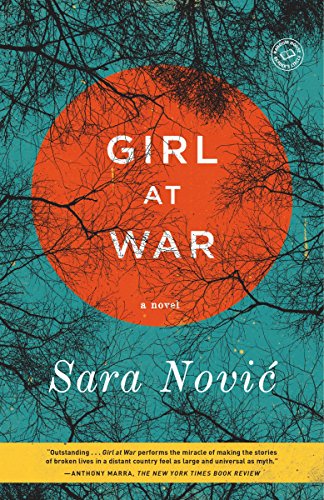 This coming-of-age war novel (368 pages) was published in May of 2015 by Random House. The book takes you to Croatia. Melissa read Girl at War and loved it; it wouldn't be on our site if she didn't recommend it.

This affecting novel — set in the near and distant past of Croatia — is a gripping look at the fallout of war and the lasting bonds of love, friendship, and loyalty.

We meet our heroine Ana when she’s 10 years old. She adores her father, her baby sister Rahela, and her best friend Luka. Ana and Luka, Luka and Ana, always together, running around the capital city of Zagreb with the singular abandon of children with lots of energy and no worries.

But that all changes when war comes to Yugoslavia.

Daily life becomes untenable: air raid drills, friends gone missing, sniper fire, a new feeling of us versus them. Ana eventually escapes to the U.S., where her tragic past becomes her biggest secret. She avoids the truth of her history, hiding it from everyone that’s important to her until it demands that she face it.

She returns to Croatia to reconnect with her heritage, her family, her old friends, and, ultimately, herself.

This story has a quiet drama as it explores big themes — war, loyalty, love — through a very intimate, personal lens. Sara Nović’s writing is elegant, even poetic, but it has a forward momentum that keeps the pages turning. Ana is a compelling narrator, and seeing the war through her eyes makes it both more tolerable and more devastating.

Warning: You will fall in love with little Ana and unabashedly root for her as an adult. Along the way, you’ll be transported to Croatia: its vibrant capital, its beautiful coast, and the anguish of the Yugoslav wars.

I was gradually recalling those mundane moments — the ones that had until now given way to more traumatic memories — of a childhood governed by collective superstition: Never open two windows across from each other — the draft will give you pneumonia. Don’t sit at the corner of the table; you’ll never get married. Lighting a cigarette straight off a candle kills a sailor. Don’t cut your nails on a Sunday. If it hurts, put some rakija on it. — Sarah Nović

Every Friday, we share our favorite book- and travel-related links. This week, we've got odd travel jobs, pretty pop-up books, novels about family curses, an ode to soup, tours inspired by Agatha Christie, and more.