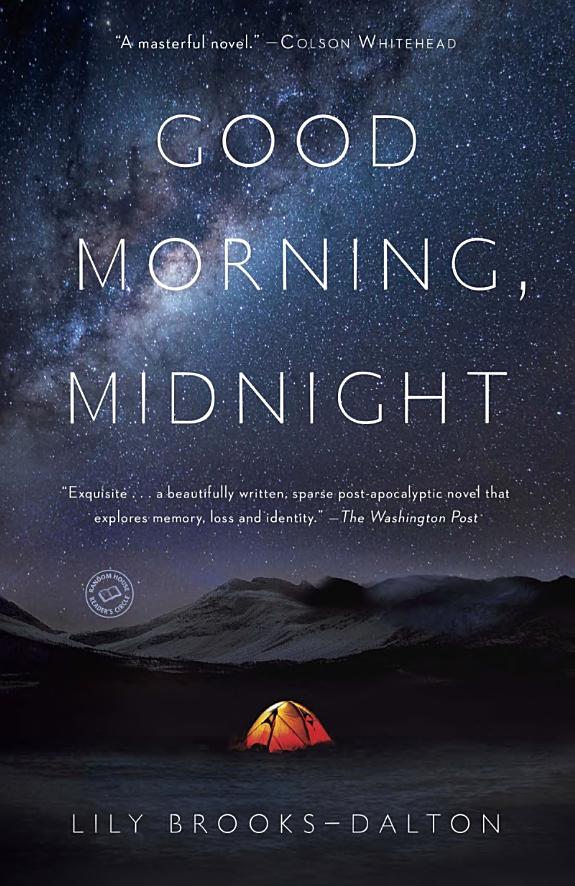 This gorgeous apocalyptic story (272 pages) was published in August of 2016 by Random House. The book takes you to the Arctic and outer space. Melissa read Good Morning, Midnight and loved it; it wouldn't be on our site if she didn't recommend it.

Beautifully written and suspenseful, this apocalyptic novel focuses not on the tragedy itself but, instead, on the lives that led up to it and what might happen next.

When the story opens, we meet Augie. He’s 78 years old and is, objectively speaking, a brilliant astronomer. He is also the very definition of prickly and arrogant. His expertise has brought him to Barbeau’s Observatory, a research station in the Arctic Circle. When an unspecified catastrophe happens, the base is evacuated. But Augie refuses to leave; he can’t give up his life’s work. ‘He had never been satisfied and never would be. It wasn’t success he craved, or even fame, it was history… He wanted to… look back into the dawn of time and glimpse the very beginning.’

Shortly after everyone else has gone, Augie finds a little girl he assumes has been accidentally left behind in the rush to evacuate. There’s no way to contact anyone, so he reluctantly tends to her needs, and they eventually form a very unusual friendship.

Meanwhile, a spaceship is on its return flight from Jupiter when the crew loses contact with Mission Control on Earth. And this is when we get to know a woman astronaut named Sully.

These are the human characters in the drama, and they’re very compelling. But the real stars of the story are the landscapes of both the Arctic and outer space. Both are vast, cold, and hard-edged with an otherworldly beauty, alluring places where humans are not welcome or safe.

The chapters alternate between Augie and Sully’s experiences, and eventually, their two plot threads connect.

Author Lily Brooks-Dalton explains she got the idea for the story while working at a radio station. Someone was responsible for knocking the snow off the transmitter to protect the radio signal. That got her thinking about someone alone, keeping a signal alive.

This story delivers thrilling action and quiet, meaningful moments; there’s no big bombastic apocalypse. Instead, Augie and Sully reflect on their personal histories and what really matters when it seems like everything else is gone.

When the sun finally returned to the Arctic Circle and stained the gray sky with blazing streaks of pink, Augustine was outside, waiting. He hadn’t felt natural light on his face in months. The rosy glow spilled over the horizon and seeped into the icy blue of the tundra, casting indigo shadows across the snow. The dawn climbed like a wall of hungry fire, delicate pink deepening to orange, then crimson, consuming the thick layers of cloud one at a time until the entire sky was burning. He basked in its muted glow, his skin tingling. — Lily Brooks-Dalton