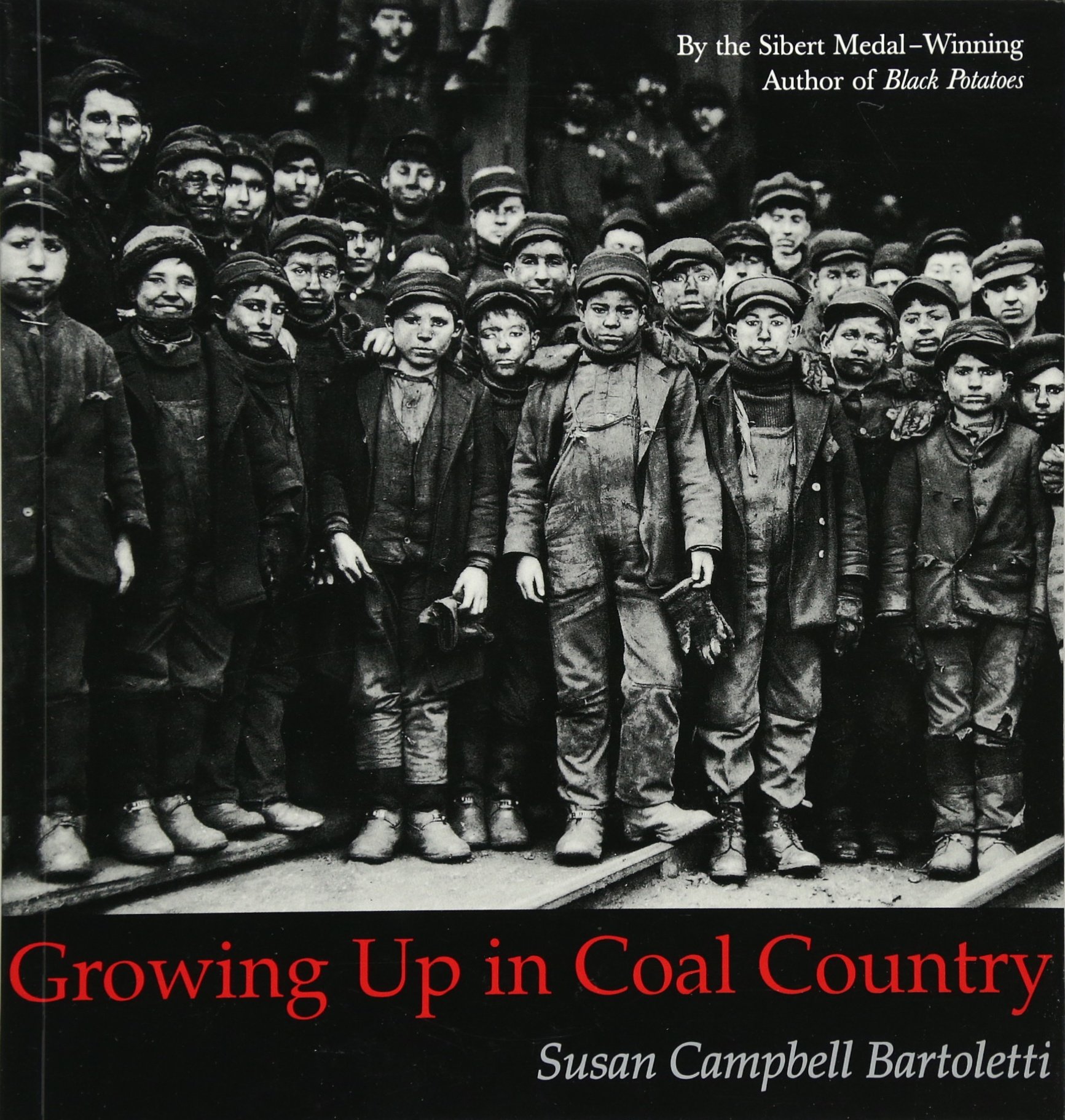 This YA historical account (127 pages) was published in September of 1999 by Houghton Mifflin Harcourt. The book takes you to 19th-century northeastern Pennsylvania. David read Growing Up in Coal Country and loved it; it wouldn't be on our site if he didn't recommend it.

Growing Up in Coal Country

Inspired by the stories her inlaws told her around the dinner table, Susan Campbell Bartoletti mined the riches of newspapers, magazines, business records, crumbling photographs, and interviews to tell the story of 19th-century coal miners in northeastern Pennsylvania.

As you probably expect, working in the coal mines was brutal, back-breaking, and frequently lethal work. Most of the people doing it were newly-arrived immigrant men and their children. Their days began in the early dark of the morning, continued through the darkness of the mine shafts, and ended with the dark of exhaustion and dinner, only to fall into bed and do it again the next day.

There are stories of children marrying at 13 and having their first child just a year later. Although the law required miners to be at least 14, parents often paid twenty-five cents for a new birth certificate and a story that their sons were small for their age. Boys were encouraged to chew tobacco at work to prevent coal dust from going down their throats. Poignant black-and-white photos show groups of boys posing together, covered in coal soot, dead-eyed and serious, dressed in their mining clothes at the mouth of the shaft.

But this book is not meant to be a horror story nor a cautionary tale. It’s an invitation to empathy and bravery. Bartoletti has said, ‘I hope that my work gives my readers courage — the courage to question and to think critically about history; courage to consider and respond to their social, political, and existential responsibilities; and, most of all, courage to stand up.’

It’s not all grim. There are also tales of children sabotaging equipment so they can go to the circus, and communicating with their own sign language, hands fluttering like birds to share adventures from life above ground.

This slim book tells a singularly American story of immigrant families determined to forge a new life in this rough-scrabble world. And it’s a well-told, emotionally resonant investigation of child labor so we can empathize and ensure it never happens again.

Pssst… We also love this book on audio. The narration by Suzanne Toren brings the stories vividly to life. It’s particularly rewarding to listen to the audio while looking at the photos in the print version.

In coal country, the workdays began before dawn. A thin icy blast from the breaker whistle roused sleeping children from the beds that they shared with their brothers and sisters. They ran downstairs to warm up by the kitchen coal stove. Their mother was busy stocking the coal, making breakfast, and packing tin lunch pails. Father and sons ate quickly, then got ready for work. The men dressed in coveralls and rubber boots. The boys pulled on caps and overcoats and laced up hobnailed boots. They grabbed their lunch pails and headed down the dark streets leading to the mines. — Susan Campbell Bartoletti