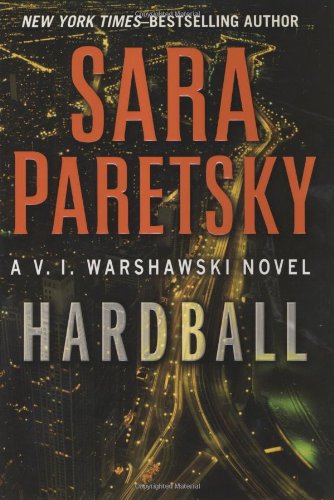 This gritty crime novel (464 pages) was published in September of 2009 by Putnam. The book takes you to Chicago. Melissa read Hardball and loved it; it wouldn't be on our site if she didn't recommend it.

Meet Chicago private detective V.I. ‘Vic’ Warshawski. She’s relentless and mouthy, neither overly kind nor soft, but she’ll do the right thing while cursing under her breath. And she’s brave to an irresponsible degree. We couldn’t love her more.

Author Sara Paretsky created her indomitable detective in 1982. Since then, Vic has starred in 20 crime novels that explore kidnappings, insurance fraud, money heists, deadly secrets, and more — all played out against a gritty Chicago backdrop.

In this installment (#13 in a 20-book series; no need to read in order), Vic is suckered into looking for a man who’s been missing for four decades. Even a hard-boiled detective has trouble saying ‘no’ to someone like Miss Claudia, a little old lady with a dying wish. As Vic digs into the man’s past, she learns hard truths about her own family history.

Vic is the very epitome of a Chicago native: She’s the daughter of an Italian opera singer and a Polish-American cop. She grew up amid the racial challenges of the late 1960s, including riots on the South Side and a memorable march with Martin Luther King, Jr. These memories come back to haunt her as she excavates the illicit alliances, lies, and coverups of the past.

As always with our lady detective, we’re transported to the heart of Chicago, where we meet remarkable characters and get an insider’s view of Windy City politics and the police department. There are plenty of big feelings and thrilling action, including a knock-down, drag-out brawl, dread-soaked prison visits, and threatening verbal jabs. It’s V.I. Warshawski at her best, which means it’s the worst time to be a bad guy.

This had always been a rough part of town. But when the mills were filling the landscape with clouds of toxic dust, most people had good jobs. Now those mills are as dead and gone as the cattle that used to pour through the stockyards. Most people in South Chicago lucky enough to find work are pulling minimum wage at the fast-food joints or the big By-Smart warehouse on 103rd Street. Unemployment rates have stood at over twenty-five percent for more than two decades down here, and street crime usually involves more than one gun. Skirting potholes big enough to swallow a flatbed truck, I pulled up in front of the house on Houston where I’d grown up. — Sara Paretsky