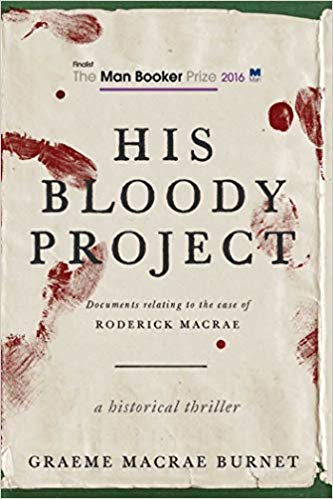 This historical thriller (264 pages) was published in October of 2016 by Skyhorse. The book takes you to 19th-century Scotland. Melissa read His Bloody Project and loved it; it wouldn't be on our site if she didn't recommend it.

Documents Relating to the Case of Roderick Macrae

There is no dispute: 17-year-old Roderick Macrae has murdered his village neighbor Lachlan Broad along with Broad’s daughter and son. So we know the what. This dark, involving thriller examines the why and the how of this gruesome murder. Is Roddy evil, misunderstood, or insane?

Life in the feudal Scotland of 1869 was brusque and brutal. The crofters — farmers who worked small patches of land — barely scraped out a living on the Laird’s estate. The rent on their crofts lined the Laird’s pockets, and their civil rights were nonexistent. Crofters were serfs, indentured servants with zero power who lived and died by whims of the Laird, his factor (a sort of general property manager), and the constable, who served as the go-between in disputes between the crofters and the gentry.

We learn Roddy’s story through the pages of his diary, and it’s a heart-breaker. Downtrodden and abandoned by the people he loves, he’s a sensitive soul — kind to animals, smitten with a local girl. But in his dangerously insular, deeply religious village, might makes right and the sensitive suffer. You’ll ache for Roddy as you read his account of the untenable situation he faced, and you might even understand why he lashed out in a moment of confusion.

But as the story continues to unfold — through police statements from the other villagers, medical records, the report of a criminal psychologist, court transcripts — the view of what really happened becomes foggier.

The salty sea air, the withering cold, the claustrophobic confines of the crofters’ existence, the petty squabbles that define village life — all are brought to vivid life through the distinct voices that argue Roddy’s innocence and guilt.

The outlook in these parts is that if one is to be visited by misfortune, there is nothing that can be done to avoid it. — Graeme Macrae Burnet

Feudal Scotland would perhaps not be your first choice should a time machine appear in your vicinity. But this gripping novel — told through police statements and court transcripts — is an unputdownable sensation.