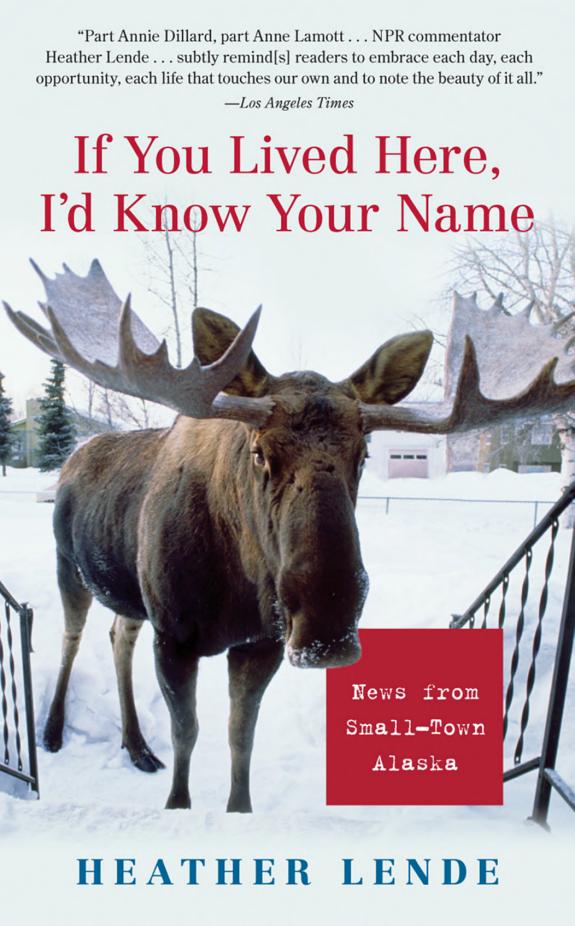 This emotionally resonant memoir (296 pages) was published in March of 2006 by Algonquin Books. The book takes you to tiny Haines, Alaska. David read If You Lived Here, I'd Know Your Name and loved it; it wouldn't be on our site if he didn't recommend it.

If You Lived Here, I'd Know Your Name

Ninety miles north of Juneau, Alaska, is the tiny town of Haines. You don’t drive to Haines; it’s boat or plane, only. It’s devastatingly beautiful. And for 30 years, writer Heather Lende has called it home. This is her love letter to the landscape and the people in her town.

A few things to know about Haines: It’s accessible only when the weather is amenable to water and air travel. There’s no traffic light, nor mail delivery. And because it’s in Alaska, a wilderness of everyday danger, people can — and do — disappear without a trace on a disturbingly regular basis. Funerals are a community affair, and the mourning (and healing) begin with the obituaries written by Heather Lende.

As our guide, Lende introduces us to the characters of Haines, present and past, and we learn their stories. There’s her husband Chip, who owns the local lumber yard, and their children; a one-legged lady gold miner; native Tinglit Indians; the saltiest of fishermen; and the wildlife — sea lions, moose, bears, eagles — with whom they share the rugged beauty that surrounds them.

Lende has a seemingly magical ability to describe three details about someone and then you know all you need to know about them. She sees people and uses just the right words in the right order so you will see them, too.

One of the most moving accounts is her quest to write an obituary for a man whom nobody seemed to know, an unusual occurrence in a town of only 1700 people. She eventually tracks down a snowplow driver who sometimes shared an early-morning coffee with the deceased. The driver didn’t know anything about him except what mattered: ‘I know he was a nice guy.’

But it’s not all life and death.

There’s an essay about making the perfect egg salad sandwich that somehow Lende deftly connects to all that’s alluring about Alaska. There are weddings and dances, trips to go ice skating. She shares the story of her son’s first hunting trip and what it was like for him, his father, and for her. Between essays, we’re treated to reprints from the local newspaper where she works: a student won an award, these lovebirds got married, a business is celebrating its anniversary.

It’s all ordinary and unforgettable, impactful stuff — the good and bad and tough and transcendent business of living life in one of the most remote areas in the States.

Our senior member is Maisie Jones, a widow who has an English accent. She always dresses up and sometimes wears a hat to church. When I had knee surgery, Maisie took the opportunity to get me acquainted with opera. She lent me videos of Carmen and La Bohème and them came over and watched them with me, just to make sure I understood the story lines. — Heather Lende