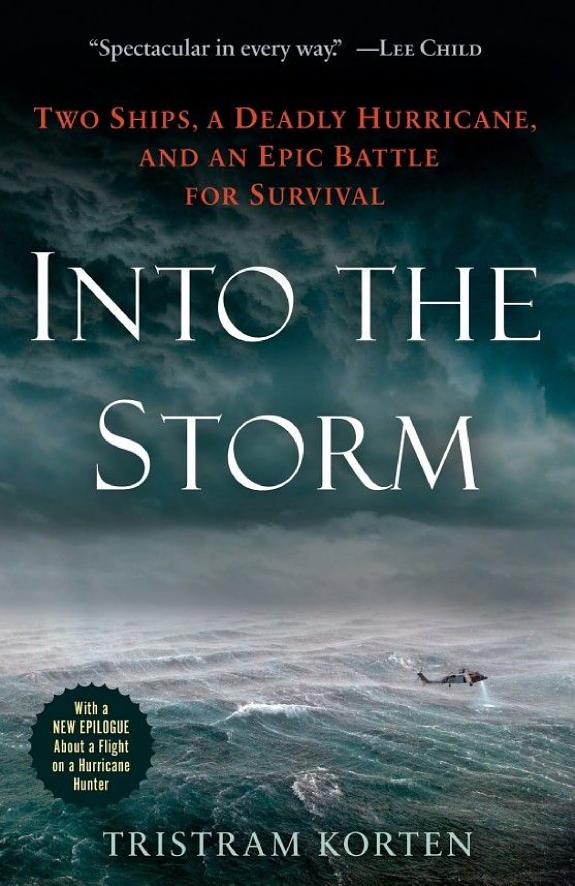 This gripping nonfiction tale (288 pages) was published in April of 2018 by Ballantine Books. The book takes you to the stormy sea. David read Into the Storm and loved it; it wouldn't be on our site if he didn't recommend it.

Two Ships, a Deadly Hurricane, and an Epic Battle for Survival

In the fall of 2015, Hurricane Joaquin crashed into the Bahamas and devoured two cargo vessels: the American El Faro with a crew of 33 souls aboard and the Haitian Minouche, a smaller, older freighter served by a dozen sailors. Both ships and the entire crew of the El Faro were lost to the sea.

This is the well-told true story of those doomed ships, the brave Coast Guard swimmers who executed the search-and-rescue operation, and the human foibles that drove the vessels into the hurricane’s destructive path.

Using extensive interviews and the ships’ Voyage Data Recorders, veteran journalist Tristram Korten leads us through the actions and decisions made by the captains of both freighters. His narrative explores the ships — the 790-foot El Faro and the much smaller 230-foot freighter Minouche — from stem to stern, helping us understand the disparate and increasingly desperate crew members.

The prose delivers a compelling and readable primer on open-ocean shipping and weather forecasting and places us right in the center of the action with the Coast Guard. You’ll meet rescue swimmer Ben Cournia, who dropped from a helicopter into the ocean — in the middle of a seething tropical cyclone — to pull survivors from the turbulent waters.

The parallel and contrasting stories of these ships is a page-turner — a respectful, sobering, and suspenseful examination of one of the largest U.S. maritime disasters. It’s a moving tale of necessary bravery, loyalty and brotherhood, and the unrelenting power of nature.

Many of the men, in a very Haitian way, were already accepting their fate as God’s will, and were asking their mates to deliver messages of love to their families if they happened to survive. Gelera, whose religious devotion would be hard to match, also trusted that whatever happened would be God’s will. But he couldn’t resign himself to doom for a simple reason: He was responsible for everyone on his ship. It was his duty as captain to keep them alive, and it would be his legacy if they perished. This, perhaps, was an even greater motivating force than his own survival. A captain who lost his crew would leave a stained memory on this earth. — Tristram Korten