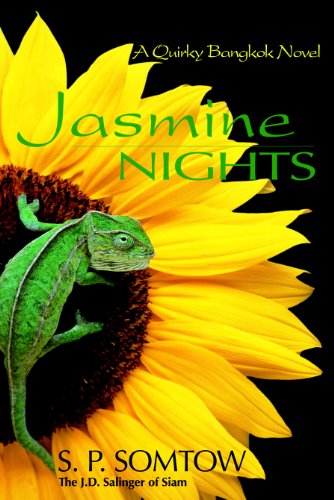 This tragi-comic coming-of-age story (379 pages) was published in January of 1995 by St. Martin's Press. The book takes you to 1960s Thailand. Melissa read Jasmine Nights and loved it; it wouldn't be on our site if she didn't recommend it.

Infused with magical realism and Thai culture, this is a tragi-comic coming-of-age story set in 1963 Thailand. You might think the American civil rights movement, the Kennedy assassination, and the works of Homer and Virgil wouldn’t mean much to a 12-year-old Thai boy. You’d be gloriously incorrect.

Our narrator and winsome hero is Justin, a name he’s given himself because he prefers it to his formal Thai name (Sornsunthorn) and his family’s diminutive nickname for him: Little Frog.

His parents have been ‘away’ for three years. He doesn’t know if they’re alive or dead, and neither do we. He’s been left in the care of three aunts whom he has dubbed The Fates. The sisters Ning-nong, Nit-nit, and Noi-noi bicker and backstab and love each other the way only sisters can. Wealthy and entitled, they live on a grand estate, along with their social-climbing brother and a wraith-like great-grandmother, with servants to tend to their every whim.

Justin spends his days dreamily reading sci-fi, the classics, and Greek mythology in the faded ruins of a grand library. Lost in his daydreams and visions, he sometimes doesn’t quite know what’s real and what isn’t. It’s a solitary, intellectual existence for a boy on the cusp of adolescence. Then fate intervenes in spectacular fashion: He’s thrust into an uneasy friendship with the son of the family gardener and a young, African-American boy named Virgil.

Justin’s routines implode with previously unknown-to-him ideas about racism, social class, and sex. He’s confused and confounded on the regular, and it’s a delight. The Three Fates are a hoot. An over-the-top limbo party has the household in a tizzy for weeks. The young boys have an eye-opening experience at a massage parlor. There’s a lot of hiding in bushes and closets to spy and eavesdrop. And because these are pre-adolescent boys, the scenes of their sexual awakenings are innocent and heart-piercingly awkward.

Through one life-changing year, Justin experiences sorrow, love, friendship, disappointment, and triumph. He takes a stand for his friends and for himself and discovers the troublesome, rewarding world outside his books.

In my depression, I open the Botticelli box and gaze at the epic poem I have been composing about my parents’ absence. O Muses! the poem begins, for there is nothing nobler than an apostrophizing opening: O Muses! sing of my parents’ absence inexplicable, Which hath cast a blight upon my wretched soul; Sing of my sorrow, for the Fates are fickle, And furthermore, I’m only twelve years old. — S.P. Somtow