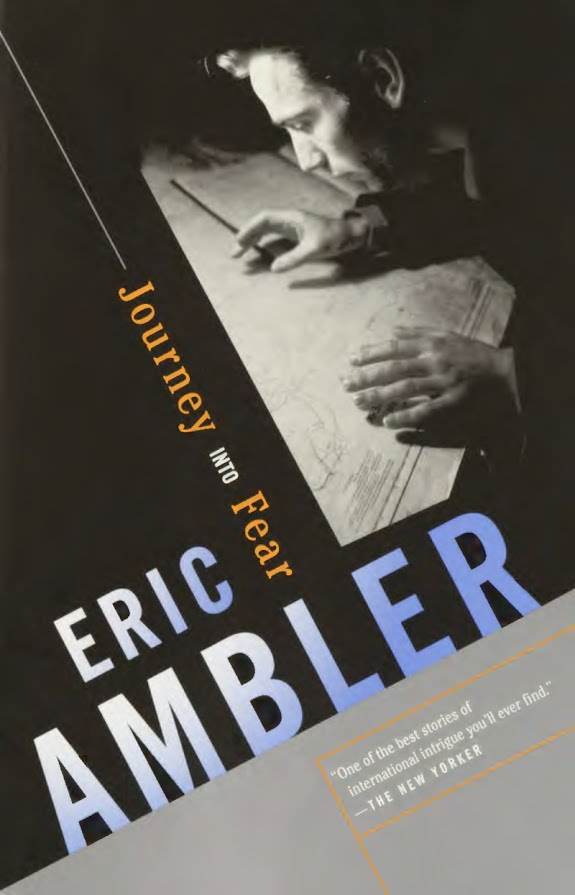 This British spy novel (288 pages) was published in October of 2011 by Vintage Crime/Black Lizard. The book takes you to a tanker ship during WWII. read Journey Into Fear and loved it; it wouldn't be on our site if didn't recommend it.

Eric Ambler was a popular British spy novelist in the early years of WWII, and his thrillers made heroes of the everyman. In most of his books, a regular joe accidentally lands himself in hot water, surrounded by spies, revolutionaries, and criminals who just might kill him.

Journey into Fear begins in Istanbul, where we meet Graham, a somewhat nerdy armaments engineer who’s frantically trying to disentangle himself from a late-night flirtation with a cabaret dancer. He’s a good husband, thinking of his wife, and all he wants is to get back home to England.

He boards an Italian freighter to begin the probably tedious, maybe dangerous journey home. That’s when circumstances spin dangerously out of his control.

Graham is carrying plans for a Turkish defense system, and the Nazis want those plans.

As he tries to lie low, he’s drawn into encounters with the other passengers on board: the femme fatale from the nightclub and her husband (!), Nazi assassins, and several people — harmless or not? — who may not be entirely honest about their identities.

They’re all trapped together in the confined spaces of the freighter, making its inexorable way to the Continent. The plot has a pleasing patina of menace, and the dinner scenes in the mess hall each evening are as humorous as they are charged with peril.

Written with a brisk pace, snappy dialogue, and shades of noir, this is a tidy spy novel that takes advantage of the drama inherent in tight spaces during tense times.

But you couldn’t get away from danger! It was all about you, all the time. You could live in ignorance of it for years: you might go to the end of your days believing that some things couldn’t possibly happen to you, that death could only come to you with the sweet reason of disease or an ‘act of God’: but it was there just the same, waiting to make nonsense of all your comfortable ideas about your relations with time and chance, ready to remind you — in case you had forgotten — that civilisation was a word and that you still lived in the jungle. — Eric Ambler

7 Great Books Set in Turkey That We Love

Take a virtual trip to Turkey with these unputdownable books, including an Ottoman-era murder mystery, a moving autobio graphic novel, two Istanbul-set thrillers, a WWII espionage novel, and a sweeping adventure tale.