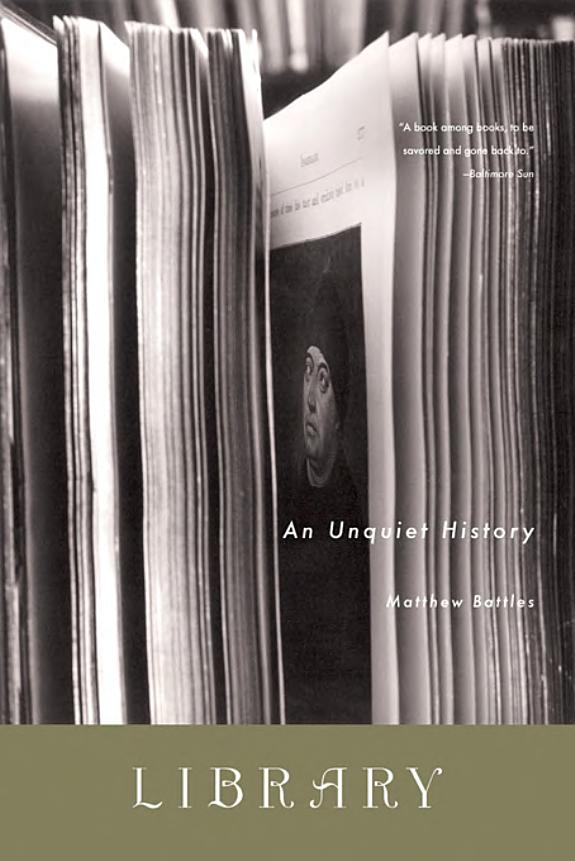 This historical exploration (256 pages) was published in June of 0204 by W. W. Norton & Company. The book takes you to great libraries. David read Library and loved it; it wouldn't be on our site if he didn't recommend it.

Matthew Battles — a rare books librarian — takes us on a tour through the ages of information from the ancient Library of Alexandria to the modern wild west of the Internet. Buckle up for a fascinating ride.

Battles’ writing makes it evident he has a deep respect and affection for his subject. His engaging, sharply observed explorations of the places and people who shape the history of libraries will make you a true believer, too.

The story begins, more or less, in Alexandria around 283 BCE when the Library was founded by Alexander the Great. We learn that later, its collection was expanded through creative means: Every ship that docked in the harbor was searched, and all books were seized so copies could be made. The copies were returned to the ship, while the originals found a permanent home in the Library. It’s clever and mildly dastardly — not the only instance of the shadow side of library life.

The destruction of libraries is a recurring event throughout history with despots, tyrants, and conquering armies dooming book collections to flames — or abandonment — even when the knowledge contained within might be beneficial to them. Many of the scrolls, tablets, and papyrus artifacts we still have today survived because they were in private libraries, hidden and safe.

The history is also populated with compelling characters who still influence our experiences in libraries today. Like Antonio Panizzi who, circa the 1830s, began to catalog books by cross-referenced subject at the British Library. Or Melville Dewey, who created the Dewey Decimal System and the American Library Association, but left behind, unfortunately, a history of sexism, homophobia, antisemitism, and racism. He was ultimately booted from the ALA for his ‘outrages against decency.’

Ultimately — despite book burning and Dewey — the story of the library is one of the triumphs of decency, of curiosity, of respect for knowledge, and of the endless potential contained in a room lined with the books and the texts between the covers.

In the stacks of the library, I have the distinct impression that its millions of volumes may indeed contain the entirety of human experience; that they make not a model for but a model of the universe. Fluttering down the foot-worn marble stairs that drop into the building’s bowels, descending through layer after layer of pungent books, I am often struck by the sense that everything happening outside must have its printed counterpart somewhere in the stacks. — Matthew Battles