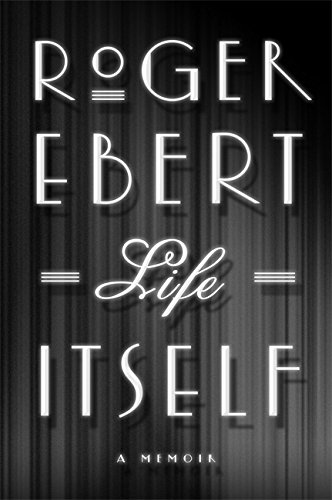 This eloquent, engaging memoir (448 pages) was published in September of 2011 by Grand Central Publishing. The book takes you to Chicago. David read Life Itself and loved it; it wouldn't be on our site if he didn't recommend it.

With his honest voice and gift for natural storytelling, Roger Ebert invites us into his remarkable life: his experiences of love and loss, friendship and rivalries, and so many movies. It’s dramatic, as you would expect, with a sweetness and nostalgia that might be a surprise.

Ebert is probably best-known for his work as a film critic, first for the Chicago Sun-Times and on the TV show Siskel & Ebert (later, At the Movies) which he hosted with Gene Siskel for 33 years. Their ‘thumbs-up, thumbs-down’ rating system set the standard for movie recommendations, and millions of Americans relied on their advice.

But he started his career as a true blue newspaperman, and his stories of the newsroom are funny and enthralling. It’s like being transported to a leisurely conversation over a Scotch in a comfortably dim bar. His gift for being wholly present and alert to details translates into stories that move and inspire, including his anecdotes about his time with Hollywood legends like Russ Meyer, John Wayne, Ingmar Bergman, and more.

In 2006, complications from thyroid cancer treatment took his ability to eat, drink, and speak. He writes brutally and eloquently about how much he missed not so much the act of eating a meal, but the camraderie and conversation that unfolds over food and drinks. But that loss of vocal power was the impetus for Ebert to write this book, and we’re all better for it.

Roger Ebert won the Pulitzer Price for criticism in 1975, and he’s the only critic to have a star dedicated to him on the Hollywood Walk of Fame.

If I were on death row, my last meal would be from Steak ’n Shake. If I were to take President Obama and his family to dinner and the choice was up to me, it would be Steak ’n Shake. If the pope was to ask where he could get a good plate of spaghetti in America, I would reply, ‘Your Holiness, have you tried the Chili Mac or the Chili 3-Ways?’ A downstate Illinois boy loves the Steak ’n Shake as a Puerto Rican loves rice and beans, an Egyptian loves falafel, a Brit loves bangers and mash, a Finn loves reindeer jerky, and a Canadian loves doughnuts. This doesn’t involve taste. It involves a deep-seated conviction that a food is right, has always been right, and always will be. — Roger Ebert