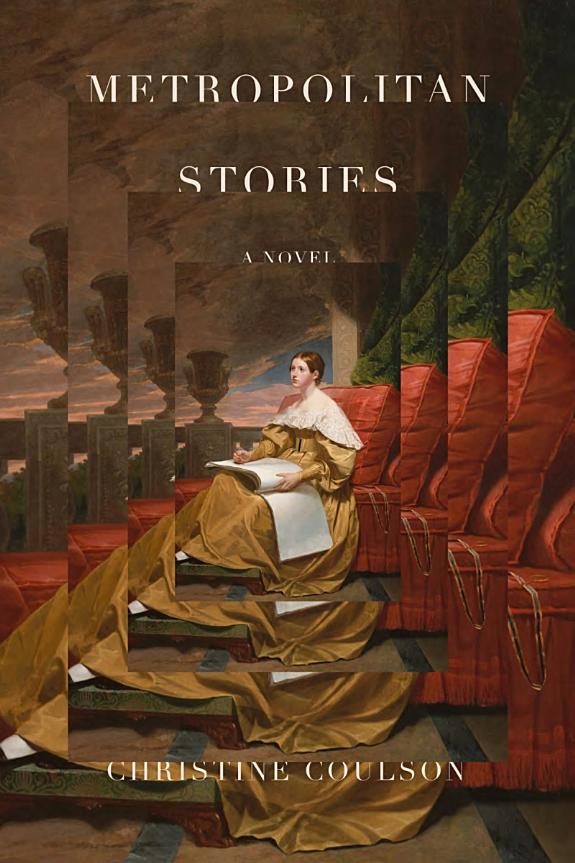 This imaginative novel (256 pages) was published in October of 2019 by Other Press. The book takes you to the Metropolitan Museum in NYC. Melissa read Metropolitan Stories and loved it; it wouldn't be on our site if she didn't recommend it.

If you ever fantasized about getting locked in a museum overnight — or imagined that when a portrait’s eyes seem to be following you, it really is watching — this is the novel for you.

Author Christine Coulson worked at the Metropolitan Museum of Art in New York for more than 25 years, starting as a summer intern and rising through the ranks to the Department of European Sculpture and Decorative Arts. She’s seen all aspects of the museum from the inside, and with this charming, moving novel, we get to go there, too.

The story unfolds in a series of interconnected vignettes that celebrate the art and the workaday parts of the institution: the storerooms, the corridors, the cafeteria.

In real life, the Met employs 2200 people. Its collection includes more than 2 million objects. There are paintings by Picasso and Pollack and Titian. Mary Cassatt. Vermeer. Sculptures, musical instruments, costumes, and weapons. Period Rooms recreate different types of rooms through time and place with furniture, knick-knacks, and lighting: an 18th-century Paris salon, an ancient Roman bedroom, an Afrofuturist room. There’s an enormous gallery with a reflecting pool and the ancient Temple of Dendur built around 15 BCE.

It’s an awe-inspiring place, and each object has a story to tell. The tone is set from the start, when the book begins with a confessional piece from an 18th-century armchair that once tenderly cradled the derrière of Louise-Élisabeth of Parma. The chair poignantly describes life in the family home, the heartbreak of being kept in a storage closet, and the near-joy it feels when a toddler almost makes it past the velvet rope to climb onto its pink velvet seat.

In other chapters, we meet security guards and the men responsible for changing the gallery lightbulbs; at the Met, the maintenance team is essential to the art, too. There’s a comical scene in which an administrator desperately searches for the right muse to be at his side during an important meeting with a fashion designer. He interviews all the muses from various artistic eras and genres of art — it’s a fun poke at the politics of museum life and a primer on art history at the same time.

Coulson does a nice job of painting with all the colors in her emotional palette. Many of the chapters are infused with wonder; some, like a fundraiser haunted by various ghosts, are more melancholy. There are also thrilling adventures of people discovering unexpected treasures in a storeroom or in the labyrinthine hallways behind the scenes.

This is the adult version of The Night at the Museum and could quickly have become twee or corny. Instead, it’s tender and elegant and funny, the kind of book you press into your friend’s hand so they can experience the magic, too.

‘Do you ever get cold near the Washington Crossing the Delaware painting? Or feel a breeze near that eighteenth-century Indian watercolor of the huge bat in the Islamic Galleries, like it’s flapping its wings?’ Radish smoothed his pants, knowing that he wasn’t getting any traction with Maira.

Radish didn’t mention that he could also hear the complaints of the boys in Washington’s boat as they crossed the Delaware: This was a crap idea, the soldiers grumbled as Radish shivered.

‘Right. Of course. It’s just, well, they are great paintings, I suppose. Powerful stuff…’ Radish stammered. He stood up and tucked his shirt into his pants for the third time since they’d sat down. ‘We should probably go,’ he said to end the conversation. — Christine Coulson