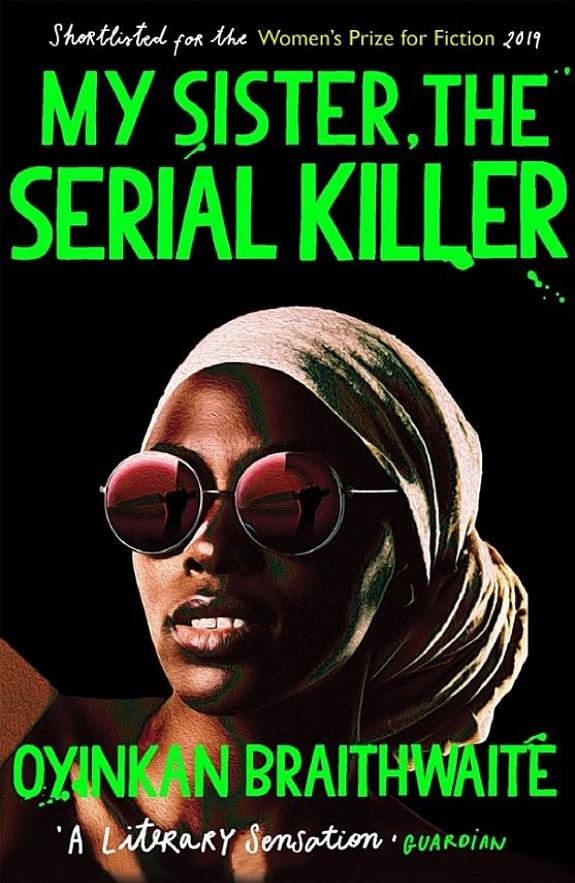 This examination of sisterly love (240 pages) was published in November of 2018 by Doubleday. The book takes you to Lagos, Nigeria. Melissa read My Sister, the Serial Killer and loved it; it wouldn't be on our site if she didn't recommend it.

My Sister, the Serial Killer

The setup is right there in the title: one sister kills her boyfriends when they become problematic, and the other (long-suffering) sister bails her out over and over again.

This is the entirety of the first chapter, and it’s a thrilling and irresistible beginning: Ayoola summons me with these words — Korede, I killed him. I had hoped I would never hear those words again.

But buckle up! This smart, snappy, fast-paced literary thriller is not really a serial-killer story, nor is it a crime novel. Instead, it’s an astute and moving (and darkly funny) investigation of what we’ll do for the people we love. It just happens to be exploring this universal theme via a nuanced relationship between the two sisters.

So who are they? Ayoola, our killer, is the exact opposite of her sister. She’s flirty and curvy and bubbly with a devil-may-care attitude (which you might expect from a serial killer). Korede is her dark-mirror opposite: angular, responsible, less confident. ‘Ayoola’s skin is a color that sits comfortably between cream and caramel, and I am the color of a Brazil nut, before it is peeled; she is made wholly of curves, and I am composed only of hard edges.’

Their physical appearance is a shorthand for how they’re regarded by others, a representation of their market value. Korede is the one people turn to for help and stability, the one you call if you need a big bottle of bleach and a scrubbing brush. But Ayoola — oh, Ayoola! — is adored and admired, desired.

In streamlined, percussive prose, this novel subtly explores the culture of Lagos: the esteem for money and good looks, the oppressive heat, the social pressure, the pursuit of a good time. Let’s dance while the world burns!

As we get to know these characters, we watch them bicker and make up, deal with messy murders, and endure a love triangle. Slowly, we also learn their history and how they became the women they are. We understand their strong (and unbalanced) bond. And we internalize why Korende can’t/won’t abandon Ayoola to clean up her own messes.

Author Oyinkan Braithwaite was born in Lagos and spent her childhood in both Nigeria and the UK. This is her debut novel; it was the winner of the Los Angeles Times Book Prize, and was shortlisted for the 2019 Women’s Prize and longlisted for the Booker Prize.

It takes a whole lot longer to dispose of a body than to dispose of a soul, especially if you don’t want to leave any evidence of foul play. But my eyes kept darting to the slumped corpse, propped up against the wall. I wouldn’t be able to do a thorough job until his body was elsewhere. — Oyinkan Braithwaite