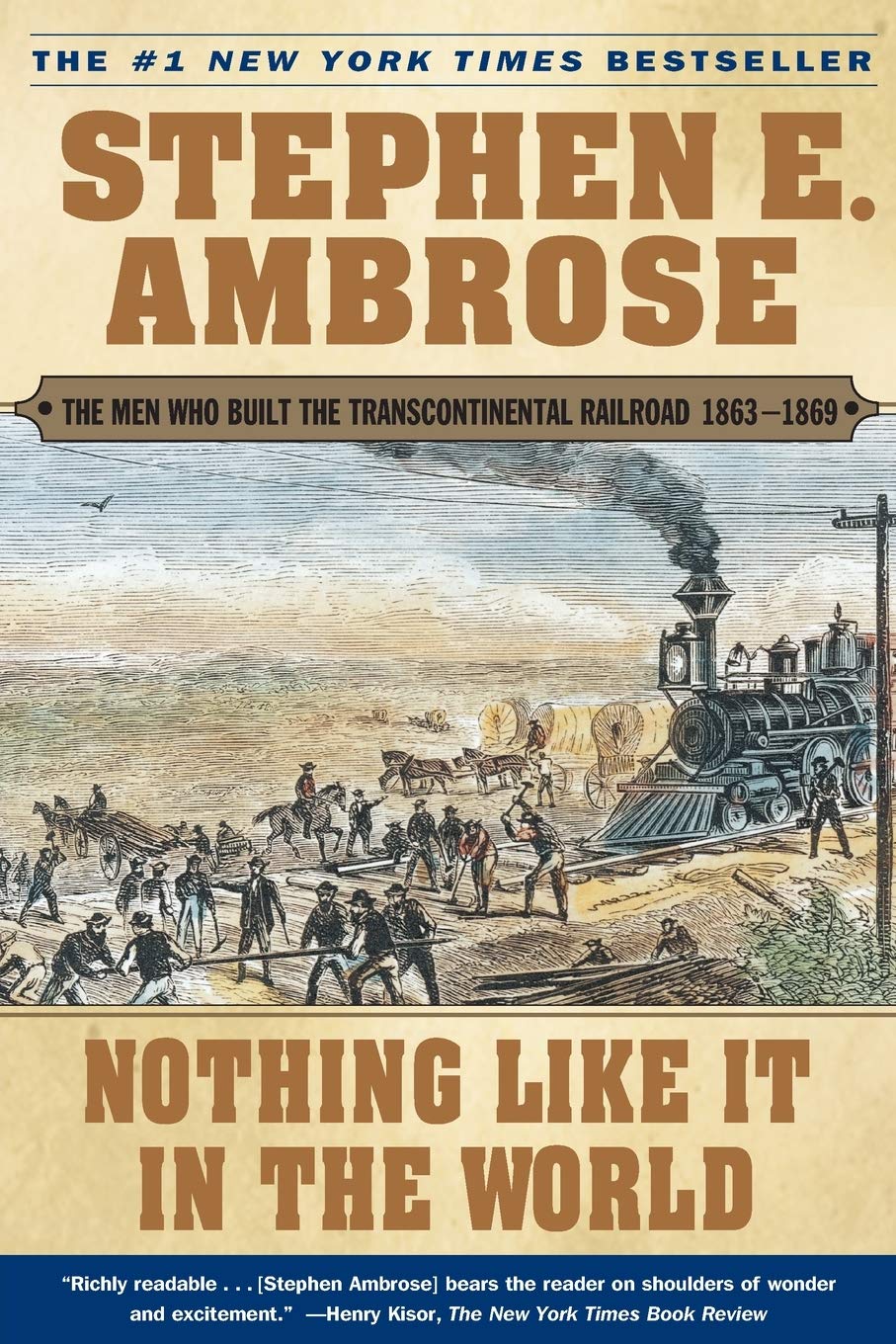 This book (431 pages) was published in November of 2001 by Simon & Schuster. David read Nothing Like It In the World and loved it; it wouldn't be on our site if he didn't recommend it.

The Men Who Built the Transcontinental Railroad 1863-1869

This remarkable book is a detailed history and a warm celebration of one of America’s greatest achievements: the transcontinental railroad. A larger-than-life story, it requires words like exploits, sacrifice, vision, tragedy, hubris, and triumph to be told.

Written by esteemed historian Stephen E. Ambrose, this very accessible history is simultaneously sweeping and intimate, a chronicle of the competitive race to finish the rail line that would connect to the two coasts of the vast expanse of the United States.

To make the dream of a transcontinental railroad a reality, the U.S. government pitted two companies against each other: the Union Pacific and the Central Pacific Railroads. This race for funding — and ultimate bragging rights — bold moves over measured thought and speed over caution. Which makes for a very dramatic story indeed.

There are unprecedented feats of engineering, tales of derring-go, political rabble-rousing, and a bevy of intelligent, determined men. It’s an immigrant story, a fable about scientific triumph, a post-war tale, and a look at events that would cement what’s come to be known as the indomitable American spirit.

From the conversations that started the project to a recap of the day the golden ‘Last Spike’ was driven on 10 May 1869, this is a compulsively readable, inspiring, and uplifting account of what can happen when smart, motivated people decide to champion an important idea.

Together, the transcontinental railroad and the telegraph made modern America possible. Things that could not be imagined before the Civil War now became common. A nationwide stock market, for example. A continent-wide economy in which people, agricultural products, coal, and minerals moved wherever someone wanted to send them and did so cheaply and quickly. A continent-wide culture in which mail and popular magazines and books that used to cost dollars per ounce and had taken forever to get from the East to the West Coast, now cost pennies and go there in a few days. Entertainers could move from one city to another in a matter of hours. — Stephen E. Ambrose