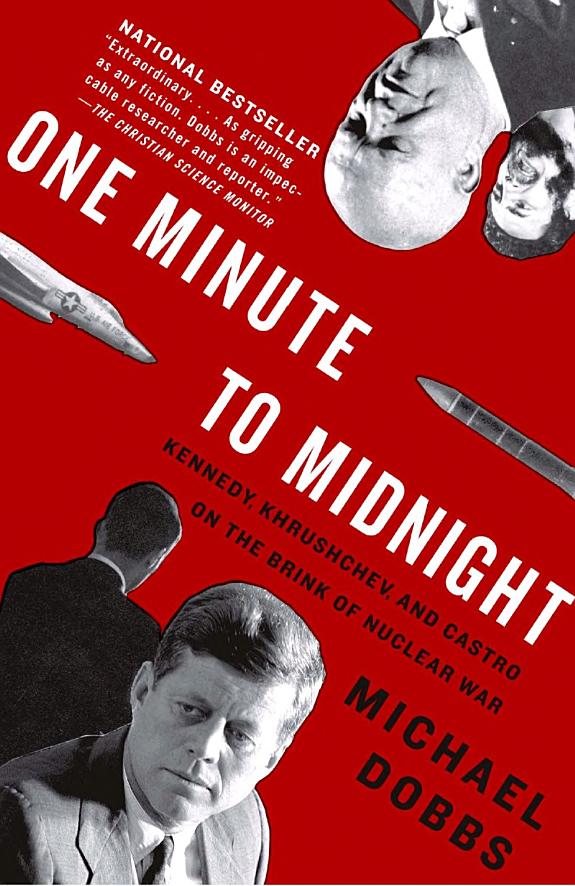 This nonfiction thriller (426 pages) was published in June of 2008 by Alfred A. Knopf. The book takes you to 1962 Cuba. David read One Minute to Midnight and loved it; it wouldn't be on our site if he didn't recommend it.

One Minute to Midnight

Kennedy, Khrushchev, and Castro on the Brink of Nuclear War

Forget action movies. This almost hour-by-hour account of the Cuban missile crisis in 1962 is a white-knuckle thrill ride through one of the most dramatic events of the Cold War. Told in gripping, human-level detail, Michael Dobbs’ account puts you in the rooms where it happened.

At the height of post-WWII tension between the Soviet Union and the United States, the USSR placed nuclear missiles on its island ally Cuba, a scant 100 or so miles off the southern coast of Florida.

What follows is the stuff of spy thrillers and slapstick comedy — were it not for the exceptionally high stakes at play — including a plot to destroy the US naval base at Guantánamo, an accidental fly-over of Soviet territory by an American spy plane, and urgent messages delivered by telegram and bicycle. For thirteen days, these two countries were on the verge of a full-out nuclear war.

At the controls, trying to anticipate and out-think each other, were President Kennedy and Premier Khrushchev. Dobbs shows us how these two men — intelligent and rational, but ideologically opposed — navigated a perilous standoff to bring the world back from the brink.

With a brisk tempo and scene-setting detail, Dobbs brings history to vivid life. He turns the spotlight on the big names of the story and the behind-the-scenes players who could have changed the course of history with the press of a single button. Entertaining, dramatic, breathless, and grounded in exhaustive research, it’s a can’t-look-away adventure that was all too real.

The Cuban missile crisis was a global event, unfolding simultaneously across twenty-four different time zones. The action takes place in many different locales, mainly Washington, Moscow, and Cuba… The plot of the story is simple enough: two men, one in Washington, one in Moscow, struggle with the specter of nuclear destruction they themselves have unleashed. But is it the subplots that give the story its drama. If seemingly minor characters sometimes threaten to take over the narrative, it is worth remembering that any one of these subplots could have become the main plot at any time. The issue was not whether Kennedy and Khrushchev wanted to control events; it was whether they could. — Michael Dobbs