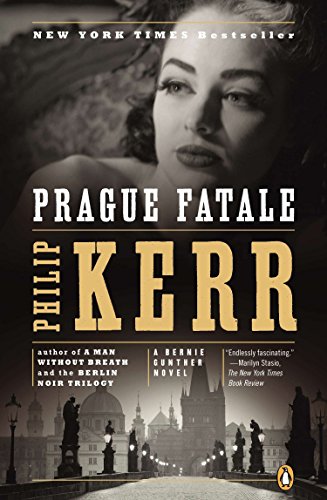 This noir murder mystery (416 pages) was published in April of 2012 by Putnam. The book takes you to WWII Prague and Berlin. Melissa read Prague Fatale and loved it; it wouldn't be on our site if she didn't recommend it.

Philip Kerr is one of the masters of the noir thriller, and in his antihero Bernie Gunther, he created a character with his own code of ethics. The kind of man who’ll risk his own skin to do what he thinks is right. The kind of man you’d be glad to have at your back.

The series spans the years leading up to WWII, the war, and the post-war period. Throughout, homicide detective Bernie struggles with his internal conflict: He’s a native Berliner who hates the Nazis, but he’s very fond of breathing.

In this installment, it’s 1941, and Bernie has just returned from the Eastern Front. His experiences in Russia almost broke him — physically and mentally — and his self-effacing wise-cracks come a little slower now. He’s seen horrible things he can’t forget. Poor Bernie! He doesn’t realize that far worse is on its way.

Back in Berlin, he’s been assigned against his will to the homicide department of the Berlin police. He’ll be working under Reinhard Heydrich, one of the worst of the worst of the Nazis. (For more on the man known as the Butcher of Prague, see our write-up of the novel HHhH.)

When Heydrich is named Reichsprotector of Czechoslovakia, he taps Bernie to join him at his country estate outside Prague. Bernie finds himself in an SS snakepit, surrounded by high-ranking Nazis, and in love with a femme fatale who time will probably prove is the wrong woman for him.

Back-stabbing, double-crossing, cold-blooded murder, the heartbreak of love in wartime… Bernie suffers it all, desperately trying to keep a grip on his humanity and his life.

Bernie can think of better ways to spend a beautiful autumn weekend, but, as he says, ‘You don’t say no to Heydrich and live.’ — Philip Kerr