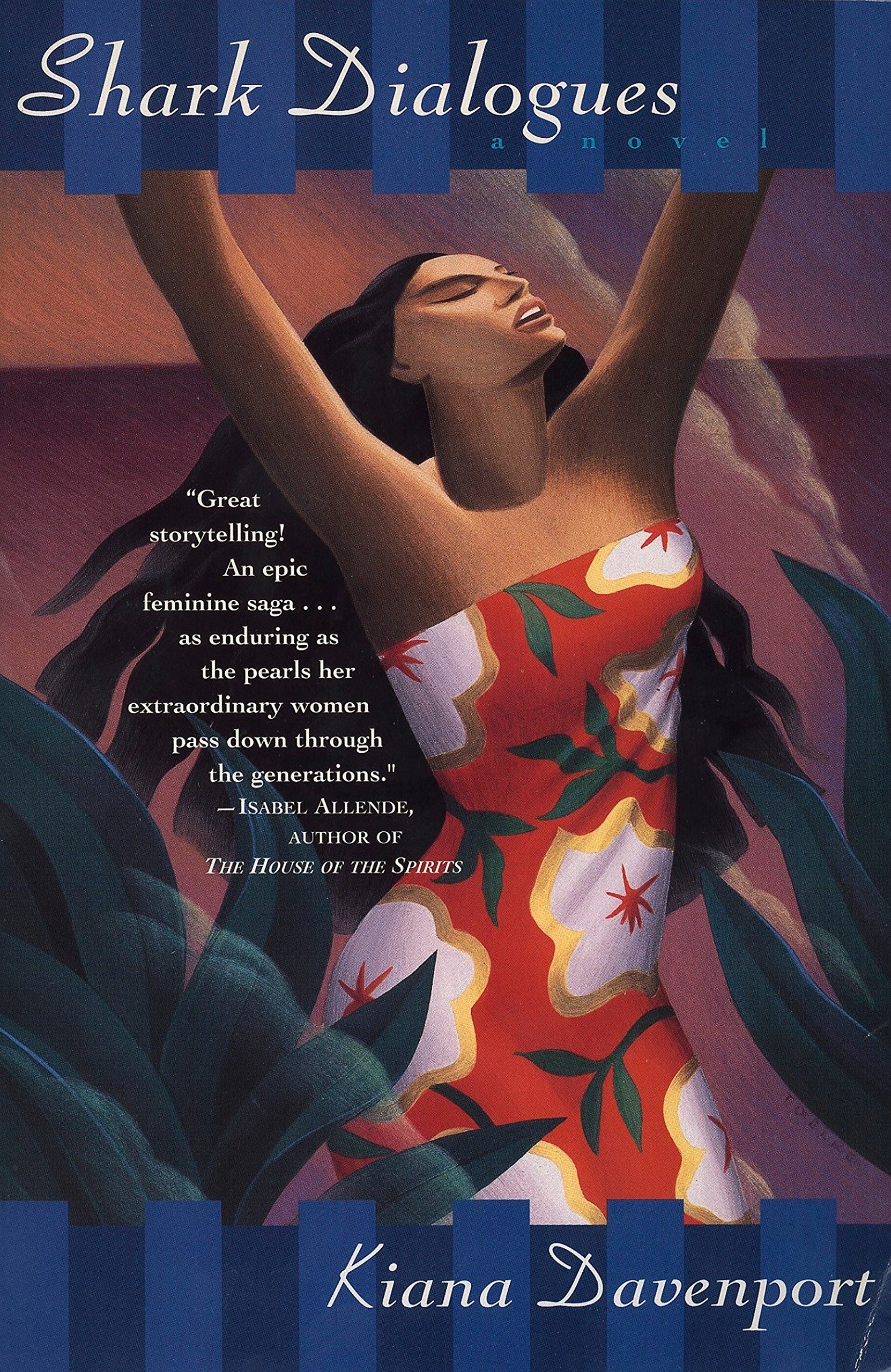 This family saga (492 pages) was published in May of 1994 by Atheneum / Macmillan Publishing. The book takes you to Hawaii. Melissa read Shark Dialogues and loved it; it wouldn't be on our site if she didn't recommend it.

This is a sweeping family saga that begins with a love affair between a rebellious Tahitian princess and a New England boy with a lust for adventure. It ends in modern Hawaii. In between, it explores Hawaii’s real historic events through the experiences of one family.

For better and for worse, the formidable Pono is the beating heart of this story. She’s 84 years old, Hawaiian, and stands 6 feet tall. Her long, thick gray hair swirls around her like a shawl, and she carries a walking cane made from a human spine — the rumor is that it’s from a lover who betrayed her. She’s a seer (kahuna in Hawaiian) and can turn herself into a shark.

Once upon a time, she had four daughters. But Pono is emotionally challenging. One by one, she drove away her daughters. Then, over the years, each of them had daughters of their own. For various reasons, Pono’s granddaughters spent the summers on her run-down coffee plantation on the Big Island: ‘In those summers in that house, four young girls had slept like the dead, stroking through torched-sugar nights, dreaming through gauzy harems of the afternoons… The life of each girl began before that house, but it so enveloped them, that was what they chose to remember as their beginning.’

When the story opens, it’s 1994. The four girls are now adults, scattered all over the world with their own messy lives. And they’ve been summoned by Pono back to the family home.

As the story moves around in time, we meet each generation of women in this remarkable family, starting with that runaway Tahitian princess in 1834. They experience every milestone of 19th- and 20th-century Hawaii: colonialism and annexation, smallpox and measles and leprosy, and the rise of the plantations. There’s a tsunami and an earthquake and the bombing of Pearl Harbor. They go to a volcano eruption with a bottle of gin. One of the girls marries a yakuza gangster (‘a walking tattoo’). Another fights for Hawaiian native rights.

As you’d expect with a family saga, the themes of love and loyalty are threaded throughout the story; it also explores racism from the inside as the women wrestle with questions of identity and dependency. Eventually, we learn why Pono has called them back to the plantation — and we get an inkling of where all of these volatile women will go from here.

Some nights without warning, Pono would shake them, wake them before dawn, drive to a secret beach where they scoured the shore with Coleman lanterns, looking for treasures washed in from the Orient. Blue glass fishing floats from Japanese fleets working tuna longlines in the Bering Sea, ivory mah-jongg tiles, gold jewelry, rare colored bottles, ceramic jugs with Cyrillic lettering. By midmorning, exhausted, the girls would drowse along the beach, until Pono piled them into the Jeep. Headed for home she would ‘talk story,’ telling how they were descended from the daughter of a great Tahitian chief, a fearless swimmer and Eater of Stones, a woman who fought for Queen Lili’uokalani, last monarch of Hawai’i. — Kiana Davenport