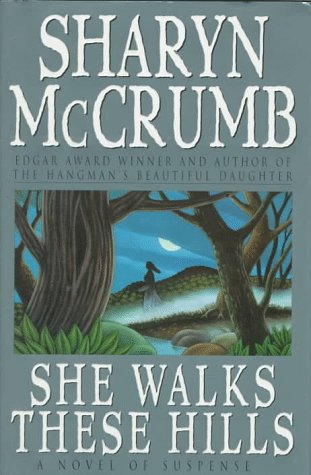 This haunting mystery (452 pages) was published in August of 2015 by Scribners. The book takes you to the Tennessee mountains. Melissa read She Walks These Hills and loved it; it wouldn't be on our site if she didn't recommend it.

She Walks These Hills

This is a big ol’ moody slice of Southern Gothic with a dollop of true-crime whipped cream on top. Set in the 1990s, this eerie, gripping story hinges on a North Carolina mountain legend.

In 1779, a local girl named Katie was kidnapped into the wilderness by the Shawnee. After her escape, she trekked hundreds of miles through the mountains to return to her family — only for tragedy to strike again. Now, her ghost walks the hills.

All of the people populating this character-driven mystery have some kind of connection to that legend.

Elderly Nora Bonesteel has the gift of the sight and regularly feels Katie’s presence in the woods around her mountaintop home. A history professor has set out on an epic hike to trace Katie’s footsteps. Forget the Appalachian trail! He’s going to plod through the wilderness. Alone. Just as Katie did. Even though he’s never hiked anywhere before.

And there’s Harm, an elderly man serving 99 years for a murder committed in the ’60s. His mind is trapped in 1967, and after his prison escape, he’s walks his own perilous journey home. Hot on his trail is Martha, a dispatcher-turned-emergency-deputy with much to prove. It’s a good thing, too, because, in addition to Harm on the loose, multiple deaths, arson, and other illegal mayhem are happening in the hills and hollers.

That’s a lot, but author Sharyn McCrumb is an expert at weaving the threads together. Her narrative is helped along by a talk radio host named Hank the Yank. A transplant originally from Connecticut, he’s smitten with the romance of Harm’s prison break.

The story is sometimes brutal, always entertaining, and ultimately, very cathartic. There are hints of hope born of the tragedies that strike this small community.

Sharyn McCrumb has written twelve ballad novels, all set in the mountains of North Carolina and Tennessee — and all taking their titles from country ballads. She’s said she thinks of her books as quilts made of ‘scraps of legends, ballads, fragments of rural life, and local tragedy.’ Basically, all your yummy gothic tropes applied to the wilds of Appalachia.

The woman had been running through the woods a long time. Blood crusted in the briar-cut on her cheek. Her matted hair, a thicket of dry leaves and tangles, hung about a gaunt face, lined with weariness and hunger. A shapeless, dirt-streaked dress that had once been blue gaped over bony wrists and sagged empty at the collarbone. She might have been twenty, but her eyes were old. She was following the deer track that hugged the ridge above the river… Nora Bonesteel stood under an apple tree at the edge of her meadow, watching the woman pass by… For more than seventy years — when the air was crisp and the light was slanted and the birds were still — Nora Bonesteel had caught glimpses of the young woman following the deer track across Ashe Mountain. — Sharyn McCrumb