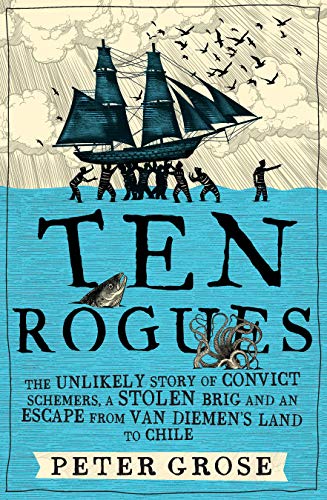 This ripping good yarn (248 pages) was published in February of 2020 by Allen & Unwin. The book takes you to 19th-century Tasmanian penal colony. David read Ten Rogues and loved it; it wouldn't be on our site if he didn't recommend it.

The Unlikely Story of Convict Schemers, a Stolen Brig and an Escape from Van Diemen's Land to Chile

Imagine an island prison so brutal that you’d rather take your chances — in the open sea, aboard an unfinished boat, with a group of backstabbing blackguards — than spend another night on that island.

That was Sarah Island in the mid-1800s. A particularly unpleasant penal colony on the west side of Tasmania. It was buffeted day and night by vicious winds, sandwiched between open water patrolled by sharks and swaths of impenetrable rainforest. If you could somehow breach the prison walls, you might have been eaten by something come morning.

But one day in January of 1834, a motley mix of 10 prisoners banded together to steal an unfinished ship to escape the prison and sail 6700 miles across the Pacific to the coast of Chile. The tale of this six-week journey centers on our antihero Jimmy Porter who was, ‘by his own account, a killer and a thief.’ Yet, he’s also, somehow, a lovable rogue: brazen, brave, foolish, and foolhardy.

As we travel across the seas with this band of death-defying criminals, author Peter Grose also delivers an entertaining master class on the British correctional system and 19th-century classism. The English had convinced themselves that there were four classes: the nobility, the middle or merchant class, the lower class, and — at the bottom rung — the criminal class. Get rid of those bad guys (who, frankly, were born that way and are beyond redemption), and all societal problems will disappear.

Jimmy and his crew are delightful proof that that notion was as silly as thinking they might sail off the end of the Earth.

This is a ripping good yarn with solid history to ponder thrown aboard for good measure. If you want to spend some time amidst schemers you can’t help but root for, this is a jolly voyage.

It’s hard to know whether to like or dislike Jimmy Porter. He was, by his own account, a killer and a thief. He was also a deserting husband and father, and a tireless schemer and con man. His real persona bears a fair resemblance to one of those enduring heroes of popular fiction, the lovable rogue. He was a self-pitying liar, but then his survival more than once depended on his being economical with the truth. And if his survival led to a few clamorous bouts of self-promotion and fact-twisting… well, what are lovable rogues for? — Peter Grose