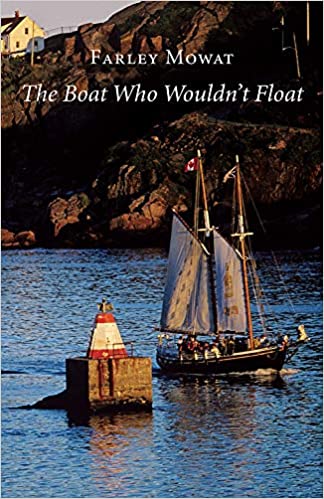 This memoir and adventure story (224 pages) was published in November of 2018 by David R. Godine Publisher. The book takes you to the coast of Atlantic Canada. David read The Boat Who Wouldn't Float and loved it; it wouldn't be on our site if he didn't recommend it.

The Boat Who Wouldn't Float

Farley Mowat is a legendary Canadian author, environmentalist, and adventurer. This is the tale of that time he bought a two-masted schooner named The Happy Adventure and sailed Canada’s Atlantic coast. As expected, hijinks ensue.

Mowat is the beloved author of more than 40 books, and in this one, he pulls off a masterful trick. The trip he describes in these pages is an awful one — everything goes wrong. He’s persuaded to buy a lousy boat; it’s poorly made, poorly kept, and full of leaks. It smells. He and his partner almost sink it a few times, and though their original dream was to sail to South America, they never get further than New Brunswick. And that takes them a few years and multiple tries.

And yet. It still seems like it’s almost a good idea. Mowat’s prose will inspire you to think something like, ‘If I was a different kind of person, I could get a boat and sail it around the cold, damp, foggy coast of Newfoundland. That’d be awesome!’

One could interpret the book this way: Mowat and his buddy — both of them frequently tipsy and shockingly ignorant of the danger they’re in — might be the villains in this story. Over and over again, good-natured Newfoundlanders, from port to port, save these men from themselves.

The tally of good samaritans and aid is long: Strangers along the way fix the boat, often without being asked, and they buy hardware and equipment for Mowat. They stop to ask if he’s okay, and then don’t take his word for it when he’s obviously not. They feed him many times. They offer advice, and, in one harbor, they paint his ship and give me proper legal papers.

Through all the ill-considered decisions and interactions with a truly cantankerous boat, you will enjoy every moment of this vicarious trip along the Atlantic provinces of Canada. Farley Mowat is excellent company.

How to buy: You can order the paperback version of this book online, directly from David R. Godine Publisher. You can also read it for free in the Internet Archive.

[T]he three cardinal tenets of rum drinking in Newfoundland: The first of these is that as soon as a bottle is placed on a table it must be opened. This is done to ‘let the air get at it and carry off the black vapors.’ The second tenet is that a bottle, once opened, must never be restoppered, because of the belief that it will then go bad. No bottle of rum has ever gone bad in Newfoundland, but none has ever been restoppered, so there is no way of knowing whether this belief is reasonable. The final tenet is that an open bottle must be drunk as rapidly as possible ‘before all to-good goes out of it.’ — Farley Mowat